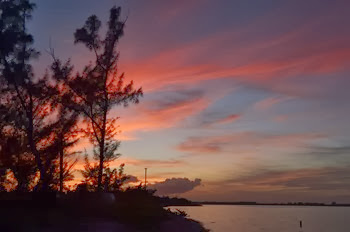 At the moment, we are holed up in the MoHo with the generator on and the air conditioning running full blast.  Being in the dry camping area at the NAS Key West (what used to be called Sigsbee Field) the air conditioner is imperative, even with our lacy shade trees overhead.  At the moment Mo is trying to get our CO2 sensor to quit beeping.  We don’t have a special stack for the generator as suggested, however even if we did, all the other generators going at the moment in these tight quarters might set that sensor off anyway. 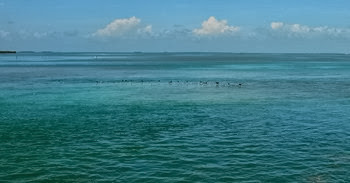 Jeremy decided to add to the humid, quite warm ambience of the MoHo by adding something of his own.  Albeit in the cat box, still requiring a nice kitty bath to make it all ok again.  Very indignantly, he is trying to lick himself dry now.  Nice to be able to not worry about him catching a cold.  The last few times I have given him a bath in Mo’s collapsible bucket he seems to enjoy it, at least for the most part.  I think his favorite part is getting all swaddled up in the bath towel and cuddled until he is at least partially dry.  He doesn’t complain.

This is our second full day in the campground, having arrived in late afternoon on Saturday.  The campground office was closed, but after reading several accounts of the procedure, and an emergency call to John (our recent new friends at “Our Trip Around the Sun”, we had an idea where to go and how to proceed.

Within minutes of calling the phone number posted on the office door, a campground host showed up in his little cart and went over the process of signing up officially on Monday morning and led us to what was to be our site for the weekend.  We were tucked back in a circular area with several rigs around us, all running their Honda 2000i’s to ward off the heat.  I guess one of these generators will power a 30 amp rig, but it takes two to power up the big guys with 50 amps.  Only planning on dry camping for 5 nights, we were content to use the generator on board the MoHo. 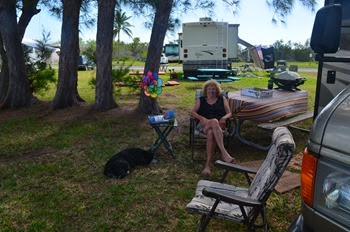 Camping here is an experience at what is most definitely an inside culture of folks who know how to do it, how it works, and those who don’t.  Lucky for us, most of the folks know how to do it, and we have communicated enough with blog friends who have camped here that we had a basic understanding of the rotation system and didn’t give our host too much trouble.  He wasn’t so lucky with some folks arriving just before we did, with a lady waving her arms and looking disgusted trying to wangle a better site on their first night here.  We did know better than that, and Walter, the host, told us that the rotation at the moment is about 4 weeks with more than 200 rigs signed up on the rotation list.

Trumbo Annex, at the Coast Guard facility down the road, is completely full with long time sites that have been filled since Christmas.  We were told there is no chance of getting into that part of the family camp.  Dry camp in this part of camp is mandatory rotation, but with only five nights here, that isn’t an issue for us.  Tired from our journey across the keys, and the traffic and surprising heat and humidity, we settled in with the air conditioner and the generator going full blast. 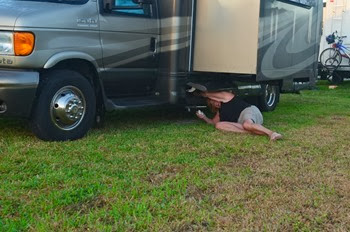 We had a bit of a hiccup with the generator, being set for high elevation, and no doubt a bit moist from all the humidity, it coughed a bit and died.  Unsure what the problem was and with darkness falling, Mo decided to wait until morning to check the oil and the altitude adjustment.  All was fine after that, but our first night here was a bit of an adjustment for us as well.  With normally balmy temperatures in Key West, we weren’t expecting mid 80’s and little breeze.  From what I have learned, it happens sometimes, but not usually this time of year.

During our evening walk around the campground, we ran into the camp host and asked what exactly you had to do to draw one of those primo waterfront sites.  He said, “Well, I have one coming in tomorrow that is too big for the site, so you could move in there after ten AM”.  OK then!

We went to sleep pretty tickled, got up early to go explore town and get our bearings in the car before our scheduled move.  Back at ten sharp, we checked the site as instructed, and with it empty, we made our move.  No sooner had we dropped the jacks and opened the slide that another camp host arrived to tell us, “Sorry to tell you this, but you have to move.  This site has come up in rotation and you can’t be here.” 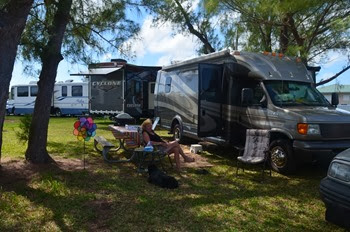 Instead of staying in our very hot, very fume filled site however, Buzz led me to a shady site that was a bit smaller and was right by the garbage cans.  Oh thank you for a small rig.  Garbage cans or not, this site is shaded with two lovely, lacy trees that are actually nasty invasive species that are overtaking the Keys.  At the moment, with the shade from those trees, we can sit outside in our site and enjoy the cooling breezes, and the MoHo doesn’t get all that hot during the day with just the Fantastic Fan running and the windows open. 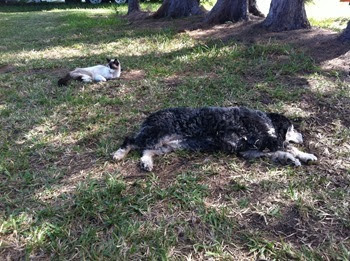 There are several hundred RVs on site at this moment, and as I said 200 or so are waiting to rotate into a full hookup site.  Generators are allowed to run between 7am and 11pm, and there is a dump and water station.  We learned that if you try to dump during the dark there is a $15,000. fine.  Yup, you read that right.

With all the complexity, it might seem easier to just go to a regular RV park, but at the current rate of $147 per night at the local KOA, and no other parks around, we decided that paying $13.00 per night to camp here was worth it.  Thus far, after about half our five day stay, we have used about 1/4 tank of gasoline to run the generator.  Pretty inexpensive digs to stay in Key West. 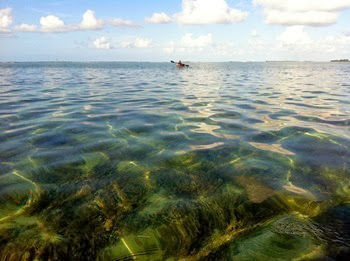 Next post:  Some of the more delightful aspects of staying and visiting in Key West and why we decided it was worth it.