Copied from our old leather travel journal in April 2011 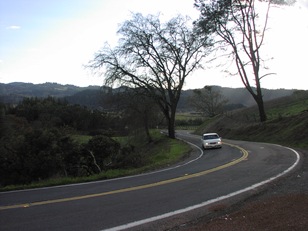 February 7th, Friday morning we left Klamath in the Chevy van at 8AM and drove through snow and rain over Mt Shasta down I-5. Stopped in at the Rolling Hills Casino and then had breakfast between Corning and Williams. Drove to Calistoga via Clear Lake. The road was really curvy and narrow with a 16% grade! The valley was green and beautiful and Calistoga had great shops. We took Molly in the French shop for wine and hors d’oeuvres. Enjoyed a great dinner with wine and cheese in our Motel 6 room in Santa Rosa, a really small room. Gas in Santa Rosa was 2.09 per gallon. 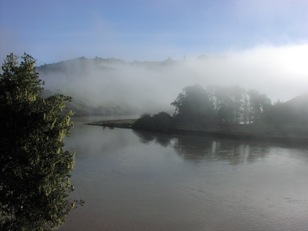 February 28, Saturday morning we were up early and drove from Santa Rosa to the great pastry shop in Sebastopol. What a lovely little town! Drove out to Jenner, hiked around Blind Beach and collected driftwood. Drove down the coast, had lunch in Bodega Bay watching all the water birds from our table by the water. Drove over the Golden Gate, past the Presidio, and down HWY 1 to Pacifica and Moana’s old school, her ranch in Montera, the Moss Beach house, and then over 92 to Belmont. Had a great dinner at Fresh Choice and went swimming and hot-tubbing at our hotel. 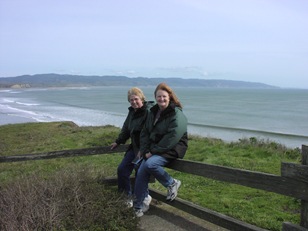 February 29 Sunday. We spent the day in San Francisco hiking up Coit Tower, walking Lombard Street, and down to Pier 39 and Fisherman’s Wharf. Went to Pier 45 and the great museum with all the old arcade games. Went to Bubba Shrimp for a great dinner at a perfect table while we watched sailboats in the bay. Home to watch the Oscars in our motel room drinking wine and laughing a lot together at the silliness.

March 1 Monday. It was raining hard today.  Moana dropped me off at a fabulous mall in San Bruno while she did her taxes and took Molly to the vet. We drove highway 82 back into San Francisco, Union Square, with the great Williams Sonoma store where I bought some wonderful Valentine plates on sale 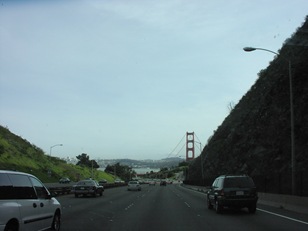 for only ten bucks. We took the cable cars up California Street to Chinatown and had a wonderful Chinese dinner at Yee’s. We were the only non-Asians in the restaurant. We had fun shopping at found dominoes at one of the little Chinese stores. Also explored some of the big hotel lobbies and took some linen towels from the Ritz. Bad! Home to our hotel for a hot tub under the moonlight again.

The little red journal goes silent for the last five days of this trip, so I went to the photos to try to figure out what we did and when we did it. I am so glad that we now have the blog and that I have learned to keep regular updates. The p 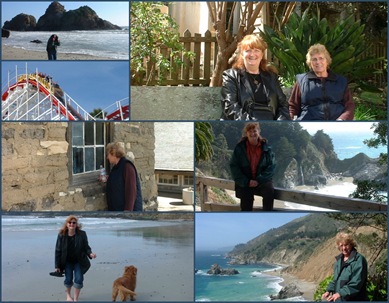 hotos tell a bit of the story, but for some reason the dates aren’t set properly, and nothing seems to be in order so that was no help either. From the photos, it seems that we spent a lot of time in the Arboretum in San Francisco at Golden Gate Park, and then traveled down the coast to visit the roller coaster at Santa Cruz and then on to Monterey to have a great dinner on the wharf and join a morning history walk through the town. We traveled down Highway 1 to Carmel and Big Sur and went hiking along the ocean cliffs there. Mo took my photo next to the huge artichoke in the Artichoke Capital of the World at Castroville.

We stayed mostly in Motel 6’s because we had Molly with us and they are easy and inexpensive. It was a wonderful trip and a great respite from the cold wet late winter days back in Klamath Falls.