I really didn’t want to fall into the trap of trying to explain why I haven’t written.  Kind of like writing in your diary, “Dear Diary…sorry I haven’t written”.  Diary doesn’t care, I am sure.  Every one of us who write these open ended online journals run into writer’s block now and then.  This time it hit me half way home from our last trip.  If you don’t know me from elsewhere, you might think that we are still lost somewhere along the California coast.  If I were to return to my blog a year from now, trying to figure out where we were in April, I might be rather disappointed to see that we possibly beamed ourselves, Star Trek Style, from Eureka to Rocky Point. 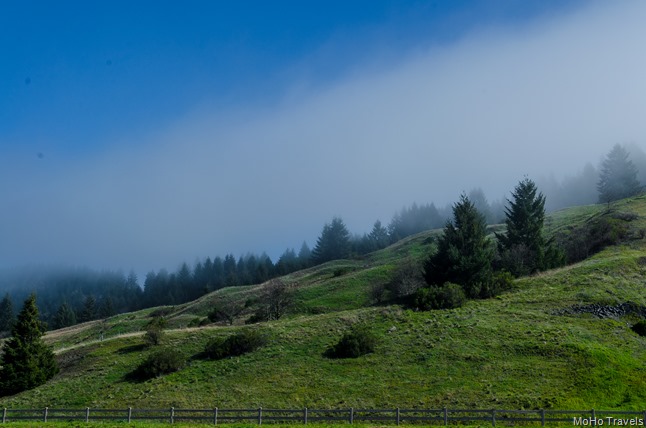 There is so much going on at the moment in our lives that travel memories have taken a bit of a back seat, but that is another story.  Maybe I’ll get to it eventually, but not right now. 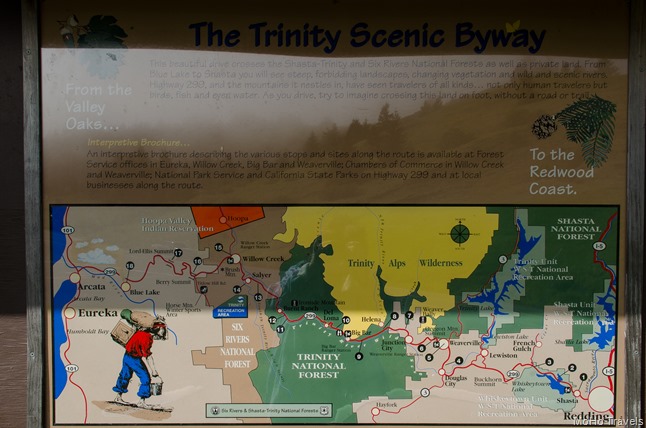 In actuality, the last two days of our short little vacation were spent ambling along at a snail’s pace.  We decided that Highway 299 would be a good route back toward home, over the beautiful Trinity Mountains and following along the gorgeous Trinity River. Called the Trinity Scenic Byway, the route is the main road that connects the upper Sacramento Valley to the California coast. 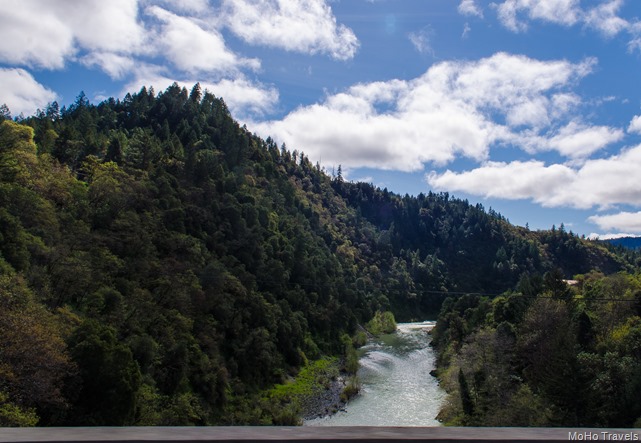 When we left Eureka, the fog was still hanging in over Humboldt Bay, but by the time we reached Berry Summit the fog was just a wisp in the wind shrouding the mountain but not obscuring the beautiful views. The day was brilliant, the skies gorgeous, the traffic minimal.  Redbuds were in bloom and the hills were Ireland green.  That springtime green thing in the coast range can be so incredibly vivid.  Like no other green I have ever seen anywhere. 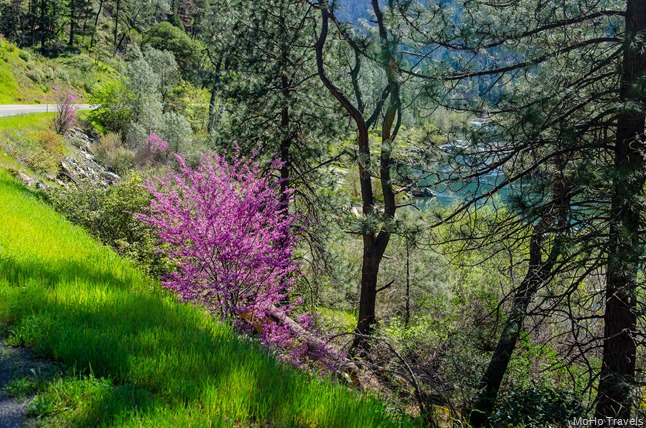 We had a destination in mind, a mere 100 miles over the mountain to the little town of Weaverville, where I had scoped out a small RV park.  We were in no hurry, and stopped along the river for photos and views.  A few miles west of Weaverville, we found a forest service campground and pulled in to check it out. 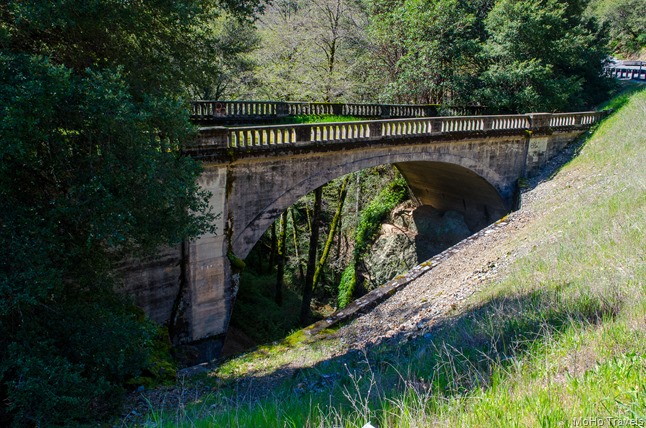 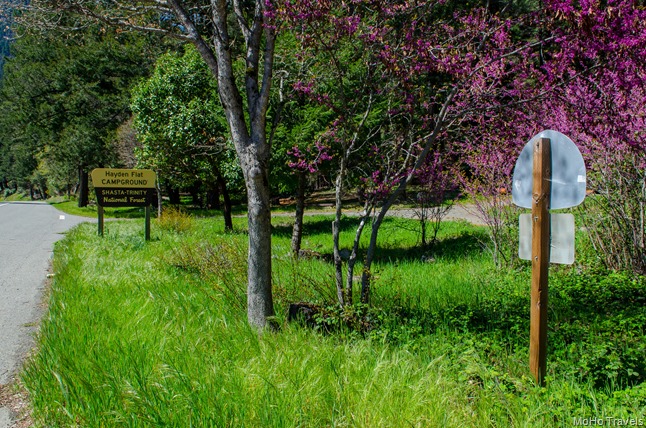 Not a soul in sight, and the camp host site was empty, but there were no gates to keep us out and after walking around a bit, listening to the river, we said, “Why not?!”  Our tanks were empty, we had plenty of water and no need for power so we pulled into the sweet little spot, opened up the door to the sunshine and the river and settled in for a lovely evening.  Three bucks with our senior pass.  Much better than that 35 bucks it would have cost in Weaverville. 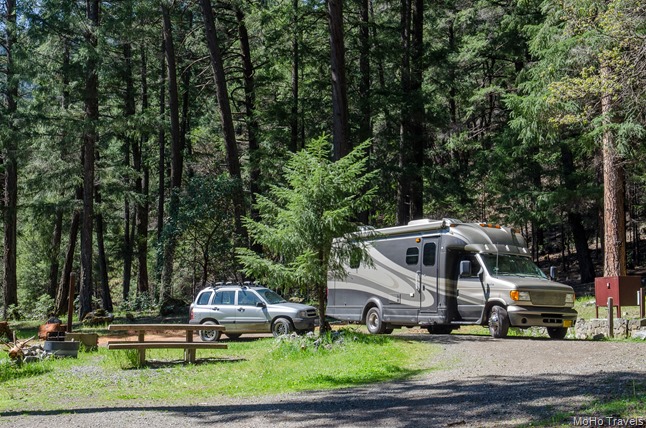 The next morning we rose at our leisure and ambled on down the road to the sweet little gold rush town of Weaverville.  It was charming in the way that California gold towns can be, with interesting store fronts and historical signs on the buildings. 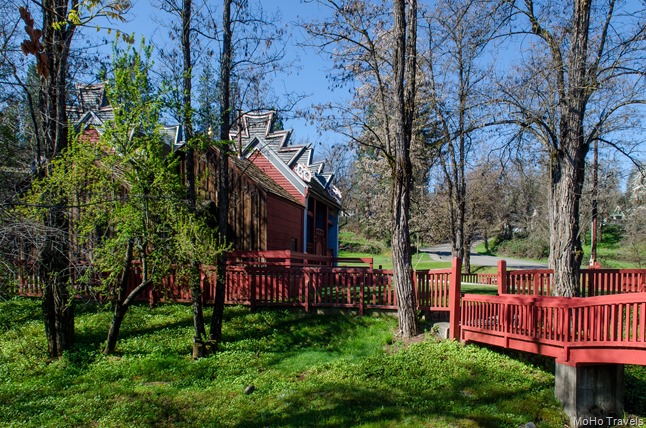 We visited the Joss House museum visitor center, enjoying the well done displays of the Chinese culture that thrived in Weaverville during the gold rush.  Neither of us felt like waiting around for a tour, so we skipped the inside of the Chinese Temple. 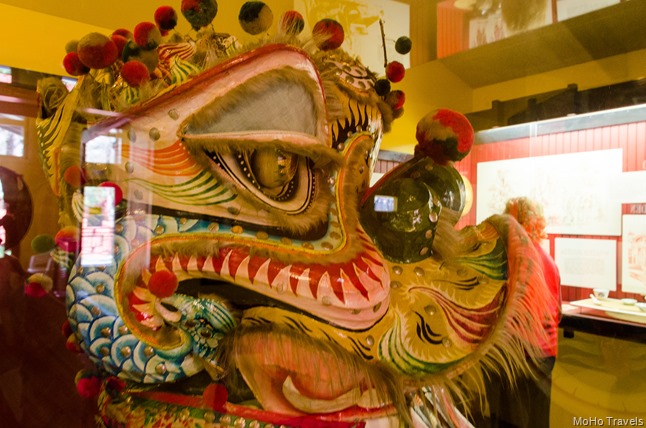 Once again, we were reminded of the great contribution made by the Chinese to the development of the American West. 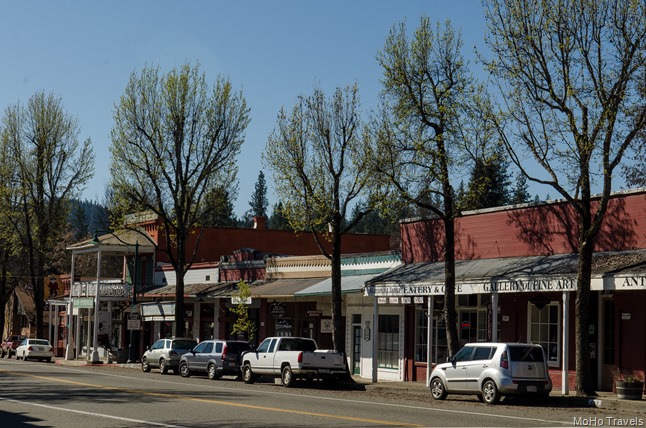 With no desire to continue east to a boring interstate, we turned north on Highway 3, following the western shore of Trinity Lake.  The road was narrow and steep in places, but not unmanageable.  We stopped to view the nearly empty lake and read the non existent signs. 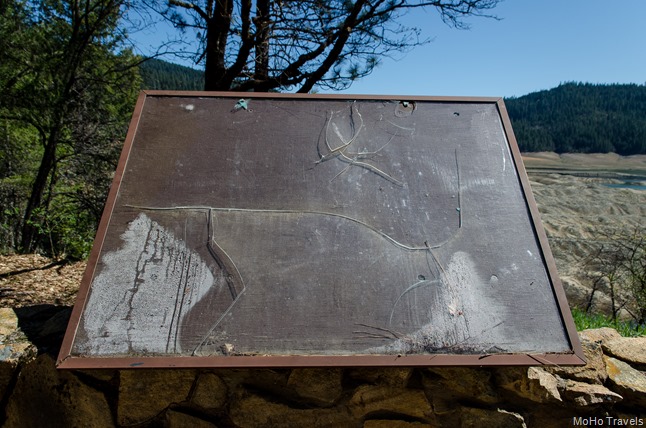 Sign vandalism is just stupid.  Although perhaps not as stupid as damming a river and backing up a lake over miles and miles of placer mine tailings. 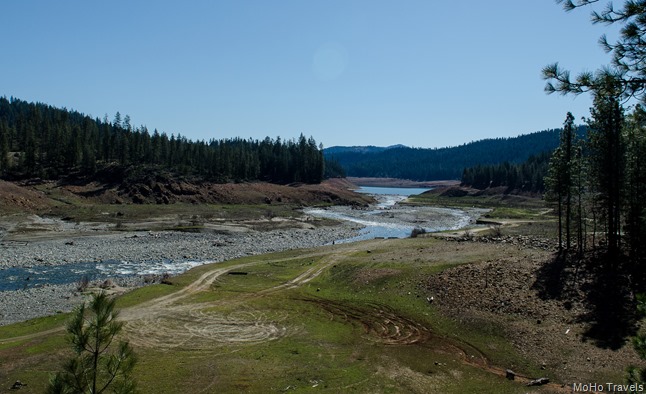 Now that the California drought has exposed the land drowned by the reservoir, I wonder if people who are users of the millions of gallons delivered annually to the California water project are at all worried about the lead and mercury left in those tailings.  I still can’t figure out the mindset of certain news pundits who say the California water problem is due to the environmentalists stopping the building of more reservoirs.  The ones already there have no water in them!  Talk about a waste of money!  Let’s build more dams so we can have more empty reservoirs?  This drought is long term, and not going to end next week. 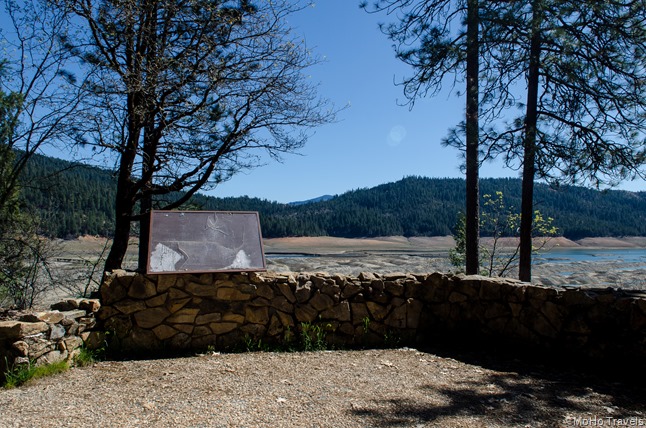 We did see several warning signs stating that in 42 miles or so, the road would be unsuitable for trailers.  No problem.  We have driven those kinds of roads many times in the past.  After passing the little community of Coffee Creek, where we found nothing at all, we continued north toward Scott Mountain Pass. 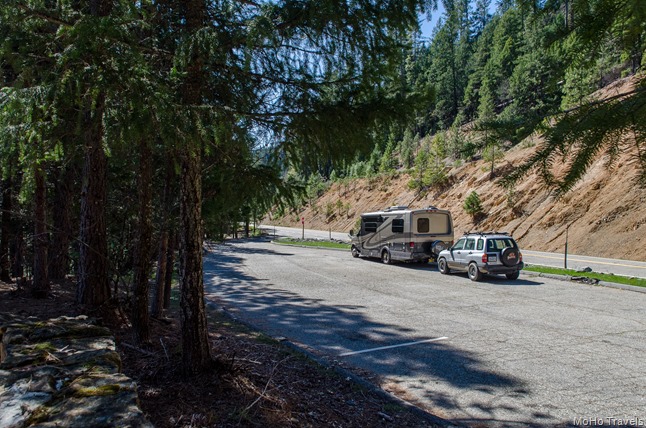 We ignored the sign that said no trailers once again, and within a mile knew that had been a mistake.  Picture a hairpin turn with a 15 percent grade.  MoHo groaned up the hill and we managed to find a turnout on the very narrow road to unhook the baby car.  Next time we will pay attention.  This is not an easy climb, and definitely not a place to be towing. And no, there are no photos of these few challenging moments.

Mo drove on ahead with the MoHo while I followed along in the Tracker, enjoying the gorgeous views and the beautiful wild landscape of the Trinities.  Descending into the Scott Valley is a treat, with a landscape of ranching and river that is the heart of the old west.

Our evening destination, a mere 80 miles north of Weaverville, was the tiny community of Etna, California.  Just 20 miles south of Eureka, Etna is charming and quiet, and boasts a great little RV park, Mountain Village.  A Passport America park, there were level sites, full hookups, and grassy spaces between rigs.  With the park nearly empty, we enjoyed the late afternoon thoroughly.  For a mere $16.00, we spent our last night before returning to the cottage at Grants Pass the next day. 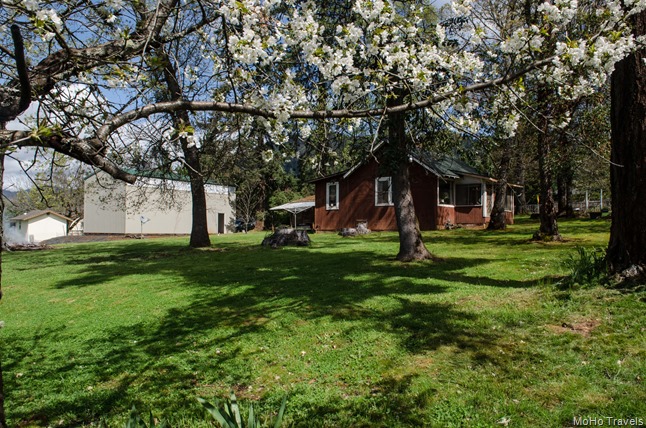 It has been just over three weeks since that day.  In that short time we spent a few days working at the cottage.  Mo managed to get the 30 amp to the MoHo shed and we mowed the acre that is greening up and growing fast.  My scheduled surgery required a few visits to Eugene and those overnight trips are always more delightful with the MoHo.  The one time we stayed in a hotel we decided, never again. 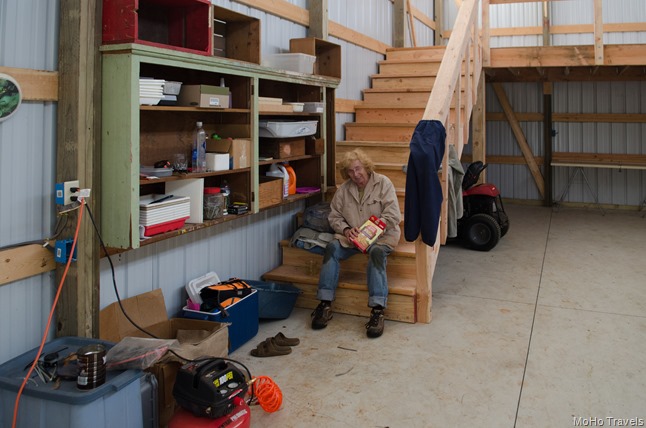 After Eugene, it was time to bring the MoHo back over the mountain to her berth in Grants Pass.  We missed having her at home and with winter behind us, it was time.  Of course, the only winter we had this year showed up on Easter Sunday with 1/2 an inch of snow and then again on April 14 with another half inch.  Crazy. 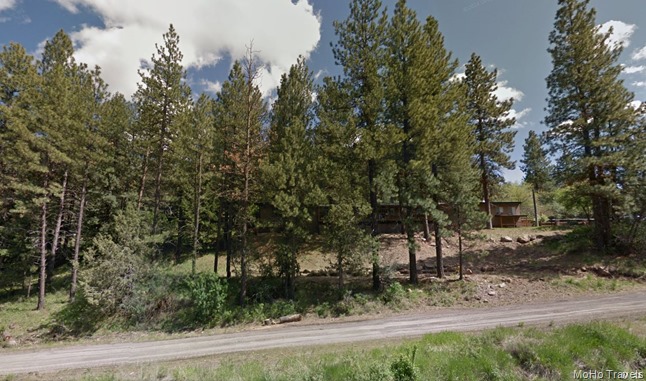 In the last couple of months, we have made some big decisions about the future, moving toward a final goal of building a “forever”  home on the cottage property.  I also decided that it was time to sell the little house I bought in Klamath Falls back in 2002.  Daughter Melody decided that as a now single mom, she needed a bit less house to manage.  She has lived in the Klamath house since 2008.

Melody and my granddaughter Axel each now have an apartment at the small complex that Mo has on the edge of town in Klamath Falls. 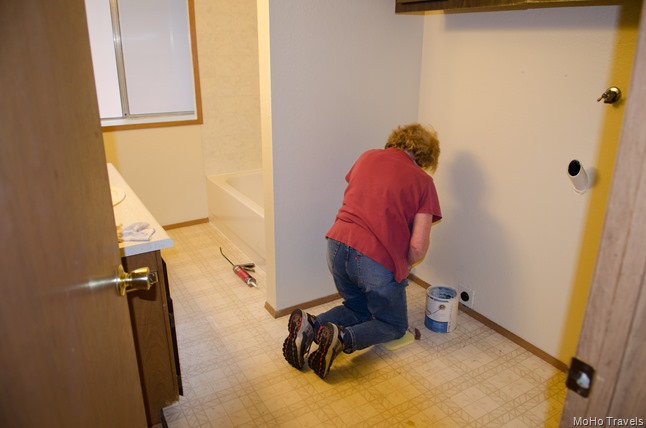 Mo and I put some time in refurbishing those apartments, painting and cleaning, getting carpets and flooring installed so they are all nice and fresh.  It was hard work but also a fun project, nice to see the apartments all pretty again.  Renters are not often much fun, and don’t seem to care about how they live.  I am glad that we no longer have to deal with crummy renters who trash the place. 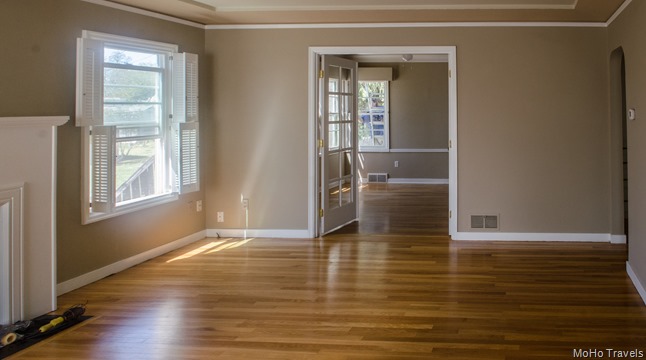 With Melody out of the Klamath house, it was time to spruce it up for sale.  I had renters in there during the time I lived in California for my final working years, and it needed fresh paint when Melody moved in back in 2008!  Again, Mo and I have been busy painting, fixing, repairing and getting the house ready for market.  I am really hoping that the time is right, and that she will sell quickly. 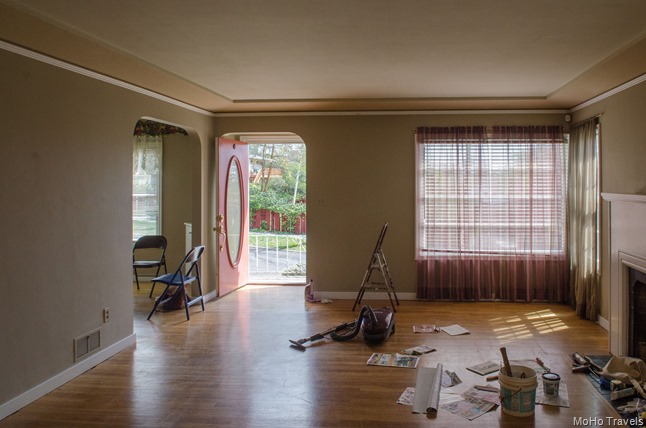 It is a great little historic bungalow in an historic neighborhood in a nice part of Klamath Falls. 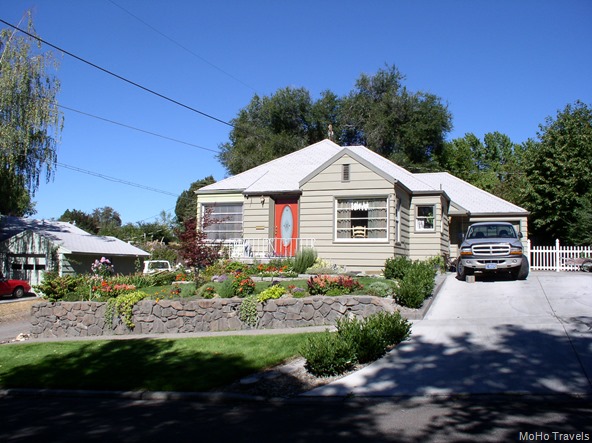 Early on during this three week process, I got a phone call from the two surgeons who will be working on me, saying that the surgery had to be rescheduled from April 13 to May 4, so I gained an extra three weeks to actually get the Klamath Falls house project done.  At least hopefully.

Mo and I feel like we are working again.  We leave the house every morning to go to one town or another, work all day, and drive home late all tired and worn out.  After surgery I am not supposed to lift anything over five pounds for 3 months!  Crazy.  So everything has to be done NOW or it won’t get done, at least not by me.

So, writer’s block?  Yeah.  I think I have a reasonable excuse.