Two months go by in a flash. I last updated with our high mountain explorations at the end of May. No time to write, and seemingly not much to write about. Until I sit down at the computer, attempting to fill in June and July in one post, and discover it is impossible. No one, not even me, wants to read everyday drivel pages. So back to the editor, and now attempting to ferret out the difference between June and July in this part of the world. As I review this post, I see that I have added a lot of photos.  That seems to be the best way to talk about the month, so bear with me if you dare.

It is high summer in Grants Pass, and it has been a fantastic season that feels like beautiful summers in my memories. Cool nights and lovely mornings to work in the yard before the day's heat settles in. Birds are busy feeding their babies in the various birdhouses around the property. Butterflies and hummingbirds actively feed on the many brilliant flowers and sometimes even use the hummingbird feeders on the deck.

Mo spent much of June repairing "stuff." The toilet in the MoHo decided to spring a leak in the seal, and after watching some YouTube videos, Mo managed to fix it perfectly. I never took photos of that project. Then the Check Engine Light came on in the MoHo, and after running a tester, Mo decided we needed to take it in to verify and fix the problem. There isn't a repair shop in Grants Pass that will work on our motorhome chassis without weeks of waiting, if ever. We returned to White City about 45 minutes east, Oregon Light Truck and Repair took good care of her, and we had her back in a few days.

No sooner did we get that fixed than Mo's trusty Craftsman riding mower went caput. The local mower repair shop took her in, and we picked it up three weeks later. Mo only had to hand mow the pasture once with the backup power walking mower we have for these kinds of emergencies.

In the meantime, one morning, we planned to haul a load of debris to the compost facility, and the truck went click, click, click. I knew the sound of a bad starter and called AAA immediately, and they showed up within an hour and took my sweet little Dakota away. Grants Pass Toyota was quick with the repair, and I had her back home two days later.

Early in the month, we began a big project that we knew might take some time to complete. When we built the house, the builder insisted that we cover all the red clay with "something." He suggested decomposed granite to keep the red clay from tracking everywhere. The DG was thinning, and it isn't particularly nice with tiny coarse grit that tracks terribly. The shoes-off rule in our house has more to do with the DG than anything else. 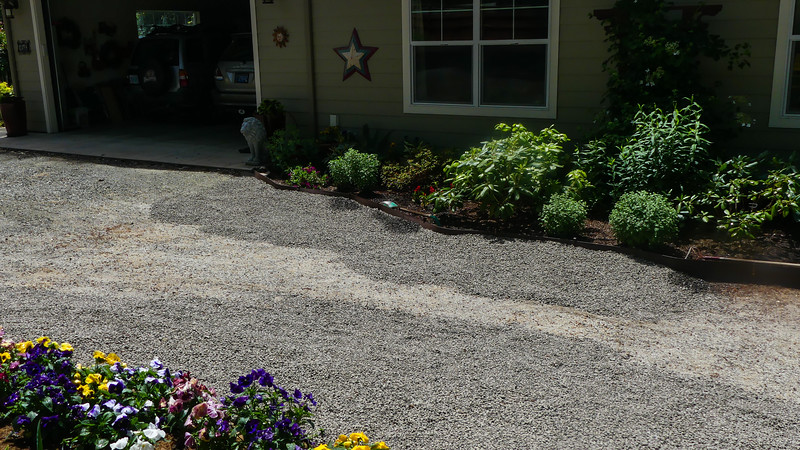 We ordered a dump load of 3/4 gravel and began the project with the riding mower and small trailer we inherited from Maryruth and Gerald when they moved to their small city lot here in Grants Pass. Mo would fill the trailer, dump it where we needed it to go, and I would spread it with the rake while she went back for another trailer load.

It was a project to do early in the cool hours of the day but not as difficult as I had expected. We completed the entire area between the flower beds on the east side of the house before our project came to a dead halt with the breakdown of the mower.

In mid-June, we took a quick overnight trip to Oroville, California, with the motorhome. It was terrific to see Lake Shasta along our route south filled with more water than we have seen in years. So many years of drought have decimated so much of our water reserve, but things caught up a bit this year. 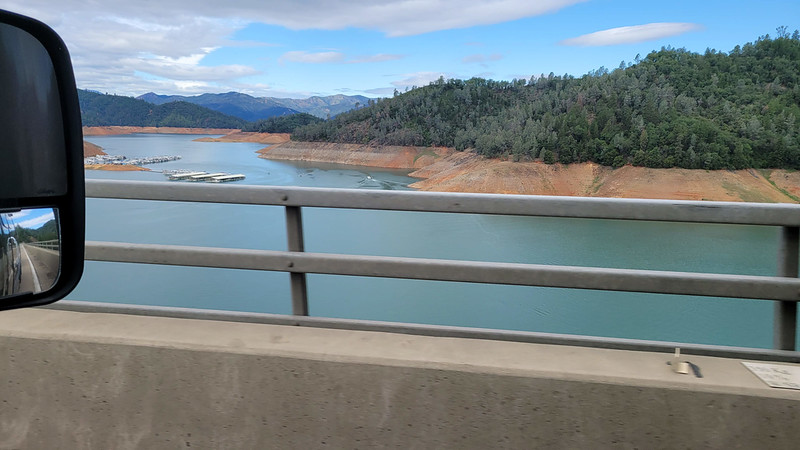 The purpose of the trip was to attend my lifelong friend Maryruth's mother's Celebration of Life with her friends and family. It was a lovely gathering in an air-conditioned venue.

"Mother," as we all called Elsie, lived to be 96 years old and had a truly extraordinary life. Oroville was hot; one night at the Gold Country Casino was enough for us. We headed back home the next day. I won't even mention the fuel cost with gasoline at more than five bucks a gallon. We are watching the prices and praying they continue to decrease even more before we head east on our big trip in August.

The day we returned from California, we planned to try a free Harvest Host campsite at the Hummingbird Winery. Our plan was to be close to Jacksonville and the Britt Festival. With tickets to Sarah McLachlan that night, we thought it would be great to settle in for the afternoon, go to the nearby show, and then return to the MoHo rather than continuing an additional 40 miles home. The view from the winery is beautiful, set on a hill overlooking the Rogue Valley.

It wasn't to be. The rain started in earnest as we drove over the Siskyou Summit, pouring down in buckets. I called the winery and was told there was mud and a steep hill to navigate, which might make it challenging to park. Sitting on the winery deck in the pouring rain didn't sound all that inviting, and we canceled the reservation, drove on home and unloaded, and returned to the Britt that evening in the car. 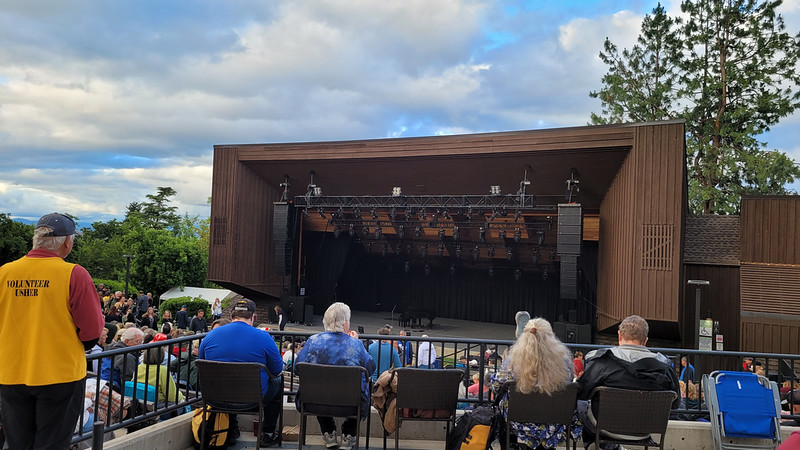 The show was good, but Sarah McLachlan is a gentle singer, and her music is lilting and lovely and likely to put one to sleep. I guess I prefer a lively show with lots of energy and excitement. I am glad we went, especially since attending Britt at least once during the season is a tradition. Bonnie Raitt is coming in late August, and it made me sad that we will miss it since we will have departed for our east coast trip by that time. Bummer. Bonnie Raitt is not a performer that puts one to sleep!

Home again, we spent another week focusing on trimming, weeding, hauling, and more trimming. It seems that gardening is mostly about cutting back all the stuff that keeps growing so beautifully during a cool, rainy springtime. It was pretty incredible, actually. Mo does the massive job of trimming our photinia hedge, filling in beautifully and growing at least 4 feet each year. The photo shows a bit of the hedge before trimming back in May. It runs about 150 feet along the front of the property and shields us from the road.

It is a big job, and it takes several days. Mo trims, and I haul trimmings to the trailer, and I rake up the leaves and debris. A couple more six-dollar loads to the compost facility with the truck and trailer take care of the piles of cuttings. Another week passes.

Mid-Month, we spent a fabulous day in town attending the Grants Pass Porch Fest. Porch Fests are quite popular on the east coast and the south, but many people out west haven't heard of them. Streets are closed to traffic, and musicians from 30 or so bands play on various porches. I thought about this later when many Facebook folks asked me about Porch Fest, and I think the concept requires an old neighborhood with sidewalks and lots of porches.

We walk the streets, listen to great music, and enjoy the camaraderie of people of all sorts having a great time. I love that so many people seem to know each other. Even though Grants Pass has a population of 36 thousand or so, it often feels like a small town.

We wandered a bit with Maryruth and Gerald, who also attended, and ran into my friend Kristin and her husband and kids. We were blessed with a cool Saturday with some clouds and no rain. Perfect! 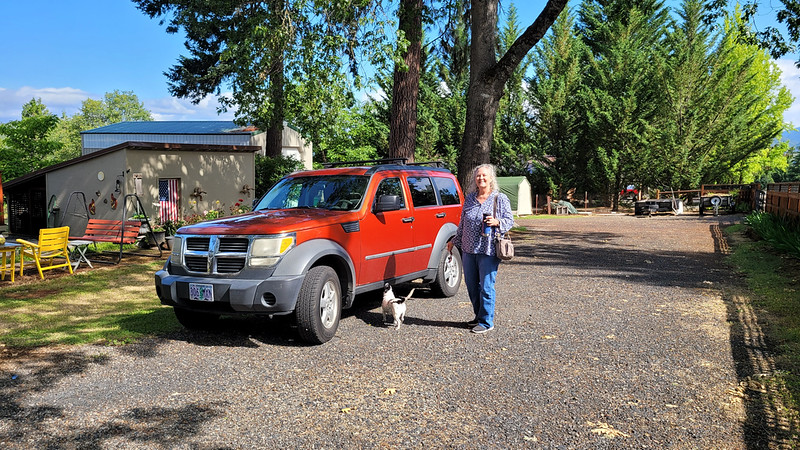 The Sunday after Saturday Porch Fest, Deborah came to visit and show us her new to her rig.  She has a Mini Cooper that she uses for her work commute, but wanted something that could tow a camp trailer.  Cute little thing!

Instead of brunch at home, we drove down the Applegate Valley to a funky and fun cafe, called “Applegate Cafe and Store”.  It was a typical small town store, with a fun cafe and bar in the back serving some locally famous burgers.  They were as great as advertised and we had great fun with Maryruth and Gerald joining us.

A bit farther down the Applegate we had a glass of wine at another favorite winery, Red Lily.  I had an important reason for making the extra trip.  Red Lily makes a delicious Verdejo wine that had just come out.  I had to go pick up the case I ordered before it was all gone.  A very popular wine!

Another visit to the Farmers Market yielded half a flat of fat, juicy Oregon Marionberries. It didn't take long to whip up a batch of delicious blackberry jam. 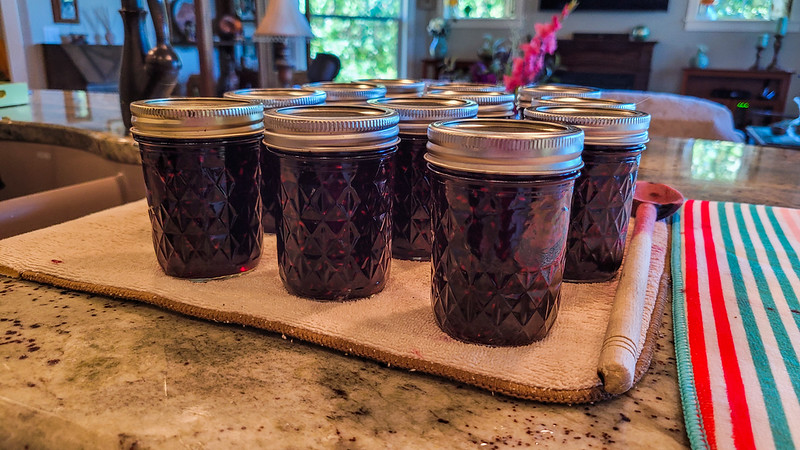 I spent a Saturday late in the month with the book club. Book club leader, Sarah, chose a theme for May for our book. With it being National Zoo Month, she wanted something about a zoo. From the choices offered, we voted for "West With Giraffes." It was a somewhat entertaining story based on the actual journey of two giraffes imported from Africa in the '30s and hauled across the country during the Dust Bowl and Depression to the San Diego Zoo. Sarah thought a field trip was in order and got free tickets to the Wildlife Safari in Winston, Oregon 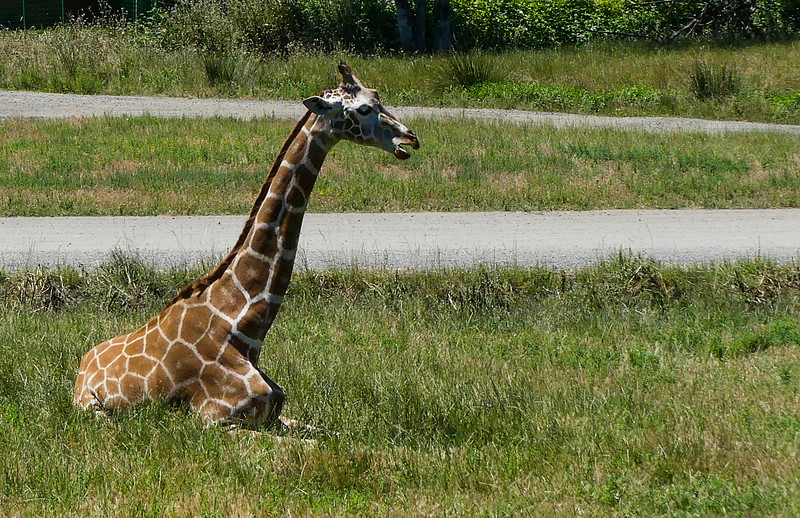 Some of us rolled our eyes a bit at a field trip. What book clubs do field trips. Even though only five members managed the trip, we had a great time. I haven't laughed that hard in a long time. The animals were OK, and we all loved seeing the giraffes, but the zebras were much more photogenic.

I thought buying the cups of animal food was something for kids to do, but Sarah popped up with a 20-dollar bill for four cups, and we laughed ourselves silly at the antics of the crazy birds trying to eat out of the cups. It was a lovely day.

We ended the month with a quick appointment to get our second Covid booster shots.  Once again, neither of us had any reactions other than a very slightly sore arm for a few hours.  We thought it was important to get boosted before our extended trip cross country.