This is the second in a series of catch-up posts about our Western Caribbean Cruise.  If you missed the first one, find it here. 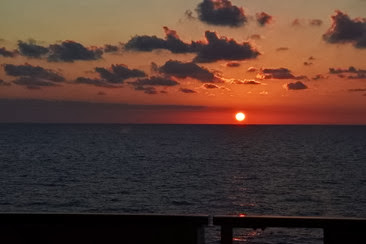 We decided that after a full day at sea, a special dinner might be in order.

We chose the Moderna Churrascaria, a traditional Brazilian Steakhouse complete with the extensive vegetable and salad bar that characterizes Brazilian style steakhouses. These restaurants seem to be all the rage, but they are not inexpensive in the “real” world.  What better way to give it a try than a $20 cover charge, per person, complete with gorgeous ocean view and no waiting lines.

There is no such thing as “formal night” on this kind of Freestyle cruising for which Norwegian Cruise Lines is famous.  I think they were one of the first lines to promote this less formal style. 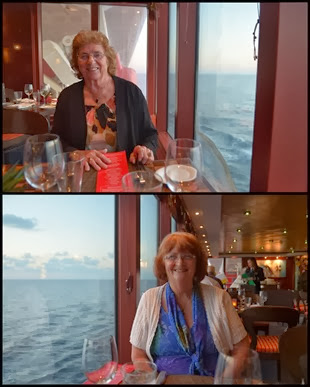 There are many venues to choose from, and if you don’t wish to wait, it is a good idea to make a reservation for dinner at your chosen venue.  Throughout the ship, and on your stateroom television, are electronic reader boards, much like those seen in an airport, which lists seating times for each restaurant and how quickly those seating times are filling.

With our reservation at Moderna early in the evening, we had time to catch a quick shot of the setting sun before we were seated at our window table.  Our waiter explained the process to us, encouraging us to help ourselves to the extensive salad bar, and then showing us the “green” and “red” side of our little table cards.  These are used to say “Stop” or “Go” for the serving of the spit grilled carved meats that will continue to arrive until you are filled.

This salad bar is nothing like an everyday salad bar, and even makes the extensive choices at some of the best salad buffets seem limited.  My favorite was a succulent celery and pear salad with candied walnuts, a lovely hearts of palm salad, a piquant tomato, fresh feta, cucumber and onion salad, the fresh and delightful cheviche…oh….I said my favorite??  No way could I decide. 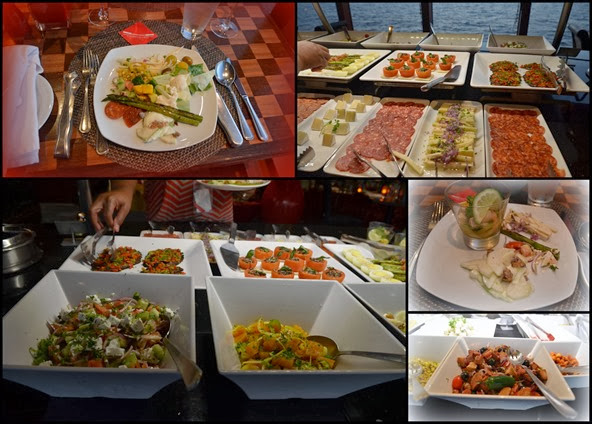 We had a nice glass of Zen of Zin Old Vine Zinfandel, a favorite from Lodi, California, and robust enough to handle the ten varieties of carved meats that were to follow.  In addition to the meats carved at the table by the passadores (meat waiters), we were served little Brazilian cheese breads, excellent red beans and onions with peppers, mashed potatoes, rice, and deep fried plantains. After dinner, instead of a palate cleansing sorbet, we were served grilled fresh pineapple. Our dessert, served with excellent coffee, was a traditional flan, a silky papaya crème, and a coconut bread pudding. 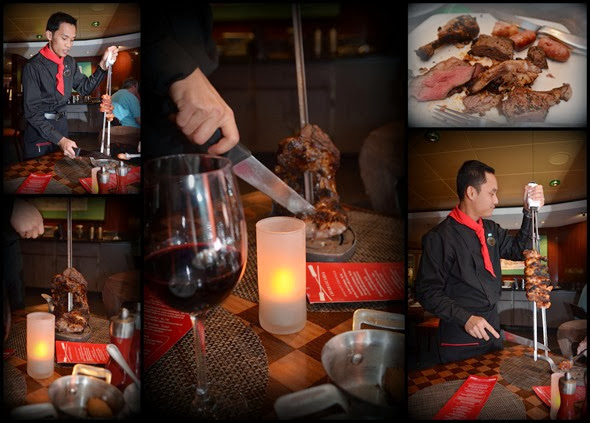 It was a delightful meal, and we enjoyed every minute of it .  Although there is no formal night, this first night at sea was designated, “Norwegian’s Night Out” and passengers were encouraged to dress up as much as they wanted.  I like to dress in something flowing, but it was great to wear sandals and a sweater with my silky sundress without feeling the least bit underdressed.  Some of our dining neighbors were in typical cruise sparkles, and others were wearing shorts.  I thought the idea of shorts in the nice restaurant was a bit tacky, but they were treated every bit as nicely as we were. 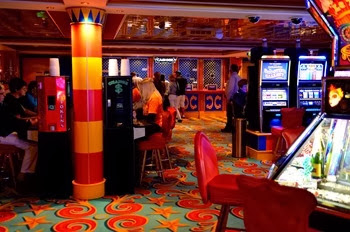 After dinner we wandered toward the casino, spending a bit of change at a couple of the flashy, noisy machines and ended up with the same amount with which we started.  Too bad that little bit of luck didn’t last through the next couple of nights, but for twenty bucks, it was cheap entertainment.

The evening show was a comedian who actually made both of us laugh out loud.  My cheeks hurt from laughing when it was over.  His humor was the best kind, based on simple observations of the humans around us.  It is the kind of humor that strikes a chord in most everyone.  It seems as though the older I get, the more it takes to get me to laugh like that.  Sure does feel good! 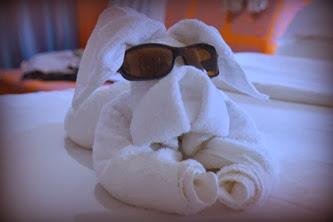 When we returned to our room, our steward had it all turned down and ready, complete with towel animals.  I think the towel animals are fading from cruise memory, so it was surprising to find them here on the Jewel.  Maybe a silly thing, but it does remind us that we are actually on a cruise.  The seas have been so calm and beautiful that there has been very little movement at all.  After my last experience crossing the incredibly rough Pacific Ocean to Hawaii, I was afraid I might not be able to cruise ever again.  A bit like getting back on the horse after a fall, and so far the horse has been just fine.