This is sixth in a series of posts about our NCL cruise on the Norwegian Jewel to the Western Mediterranean. Read about our first day at sea here,  about an evening onboard  here, Cozumel here, Belize here, and Roatan here. Also, keep in mind that the link to the left for my photos on google will take you to many more images of our cruise and the ports we visited 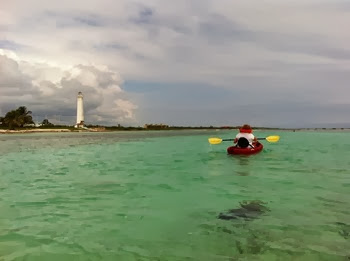 It’s always nice when a ship docks at a pier and no tenders are required to go on shore.  The pier at Costa Maya is big and new, much like the cruiser’s village built in 2007 after Hurricane Dean decimated both the cruise port village built in 2001, and the older bucolic fishing village of Mahahual.

We had no expectations for the last port on this cruise.  Reading in advance, I knew there were a few ruins to explore on excursions, that there was the Disneyesque cruise village, geared to bars and shopping, dolphin encounters, and swimming pools.  I did know the town was a short taxi ride away, but wasn’t at all sure the town was worth seeking out. 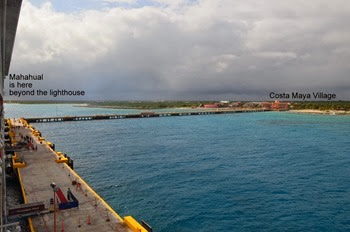 However, once we walked the very long pier to the village, I was dismayed to discover that the entire village was walled off on either side by private land, and the beach was non-existent.  For the second time on the cruise, I felt incredibly claustrophobic, and very frustrated that I seemed to be trapped in a bright, fake world of color and people.  Ack!  Mo was rolling her eyes at me as I struggled with my frustration, desperately seeking a way out.

If I had read just a little more, I would have realized that there was a rear exit from the ‘village’ that didn’t require an excursion or golf cart rental. We simply walked outside and found the old road leading south to Mahahual.  The extensive damage from Hurricane Dean was clearly evident as we walked.  Old electric boxes marked what once must have been small homes, but other than the paved road and stone street signs populated by iguanas, there was no sign of habitation. 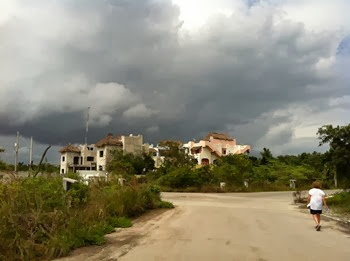 I did know that the town was only a mile and a half from the pier, so we walked in the general direction and within half an hour turned toward the lighthouse and the beach.  The skies were clearing from the morning overcast and the temperatures were quite warm.  As the day wore on, the water turned brighter and brighter shades of turquoise.  A cold local beer from the Blue Bay Beach Club and a couple of beach chairs gave us a chance to enjoy the view of the distant ship and watch people snorkeling.  Of course, we hadn’t lugged our gear, unsure when we left the ship if there was any possibility of a snorkel beach nearby. 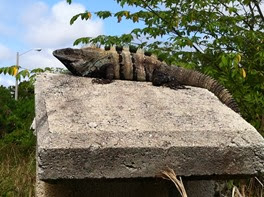 I had heard that, like most beaches in Mexico, there were entirely too many locals hawing wares on the beach.  Instead, we had only one woman approach us the entire time we were there, and after a couple of no’s, she left us in peace.  We walked the beach a bit, I went in the warm, clear water, and the kayaks sure did look tempting.

Mo liked the look of those kayaks as well, thinking we would get the best price for a tandem.  Instead, the Blue Bay kiosk only had singles, but a delightful young woman gave us two individual kayaks for 5 bucks for an hour instead of the posted $5. per half hour, or $10 for two hours.  So we walked for free, kayaked an hour for ten bucks, and spent 4 bucks having a good beer and comfy chairs under a nice palapa.  I would say that was a good price and beat just about any excursion we might have found. 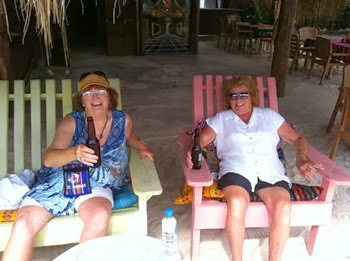 It seems that snorkeling trips on a cruise are something that should only be purchased on site and on the day you want to snorkel.  Weather is completely unpredictable, as are water conditions.  Purchasing a snorkeling trip in advance could have been a real bummer.  However, finding good snorkeling beaches is also a bit of a crap shoot.  We hauled our snorkeling gear all the way from Oregon for this cruise.  I have hopes that we will get to use the gear in Florida, even though the weather didn’t cooperate much on the cruise.

After a few delightful hours at the beach, we walked back to the ship, managing to get in a three mile walk and an hour kayak for our day’s exercise.  I think we got an additional mile just walking the length of the pier back and forth from the ship as well. 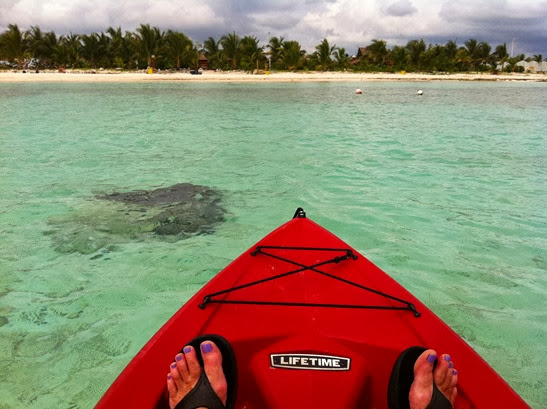 Deciding on an early afternoon lunch/dinner, we headed for the Garden Café buffet for some fresh salad and a table on the aft patio deck where I tried to get photos of the distant town and lighthouse that marked our kayak location.  The weather was perfect for dining outside. 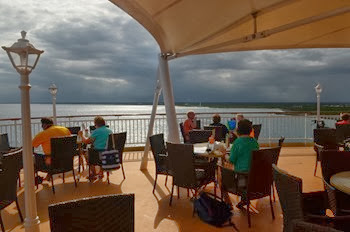 After lunch we walked up to the sports deck and watched part of a rousing game of basketball played by opposing crew teams, and then found an available ping pong table for a funny game of ping pong with wind, crooked table tops, and moving seas to add to our fun.

With our late lunch, we had no need to have dinner and instead relaxed in the stateroom until time for the last big show of the cruise, “Cirque de Bijou”.  Something else we noticed on the Jewel was the available seating in the theater for the shows, both early and late.  In the past, especially on Princess, it can sometimes be difficult to get into your chosen time for the evening show.  Not a problem here, although last night we did choose to go a bit early for a good seat and ended up down in the lower area toward the front of the theater. 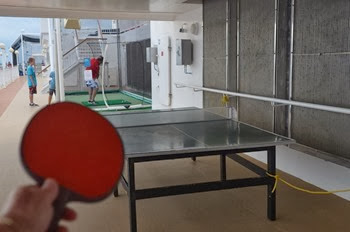 It was a great choice.  I can say, unequivocally, that the show last night was the best we have ever seen on any cruise ship, ever, on any cruise line.  Cirque d Bijou was a Las Vegas quality cirque show with breathtaking performances by all the regular artists from the evening shows.  If I had been a bit less than thrilled by their singing, I was completely taken by their ability to both sing and hang from the sky on cloth draperies as they spun and flew around the auditorium.  And for some reason, the singing was fabulous as well.

Just breathtaking!! As usual in the theater, no photos are allowed, however at the end of the main show, the crew put on a tribute show that I could have photographed if I had lugged the camera along.  Jaime, the cruise director, introduced at least 200 members of the crew who marched down the aisles and to the stage, from room stewards to Executive Chef, to the Captain.  The crowd, all hyped up from the standing ovation for the Cirque show thundered their applause. 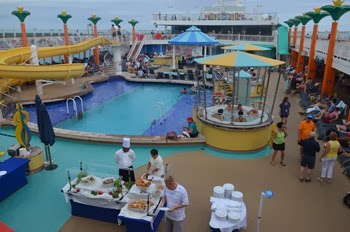 Service on the Jewel is interesting.  Individual crew members are attentive and cheerful, however the service isn’t exactly “in your face” perfect.  We are not constantly plied with invitations to purchase alcohol, and used plates are not picked up the minute you finish eating. Our steward is adequate, keeping our cabin reasonably well kept, and creating great little animals for us every night, something that has gone by the wayside on Princess.

However, we didn’t get our ice bucket constantly filled, and the mirrors often were streaked after the room was freshened.  There are so few things we disliked about this cruise, it seems only fair to mention the few that were not what I might consider “cruise quality”.  A detail we especially liked was the tabletop baskets filled with napkin wrapped flatware.  We never had to hunt for flatware and if needed could use two napkins. 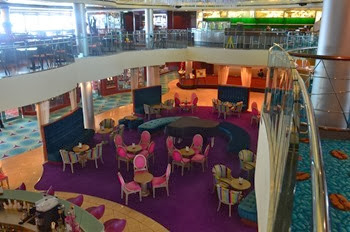 I have been trying to come up with a way to describe the ship décor, and this morning it hit me.  Without any glitz and sparkle, no fancy shined brass, interesting art, flowers in the bathrooms, crystal chandeliers…the ship seems a bit like funky Key West conch house.  Lots of bright wood, bright Key West colors, and not much that seems to be “cruise fancy”.  It is more like a good working class vacation resort, with everything you need in a pleasant environment.

Unlike my expectations for a possibly mediocre experience, I wouldn’t hesitate to cruise Norwegian again if the price, departure port, and destinations fit where I wanted to go.

Tomorrow is the last day of this cruise, with a full day at sea.  Rumor has it that the unseasonably cold weather in the south has moderated a bit and the forecast is for a cloudy day in the low 70’s in New Orleans on Sunday.  Tomorrow at sea we can expect mostly sunny skies with temps in the mid 70’s.  Lucky lucky US!! 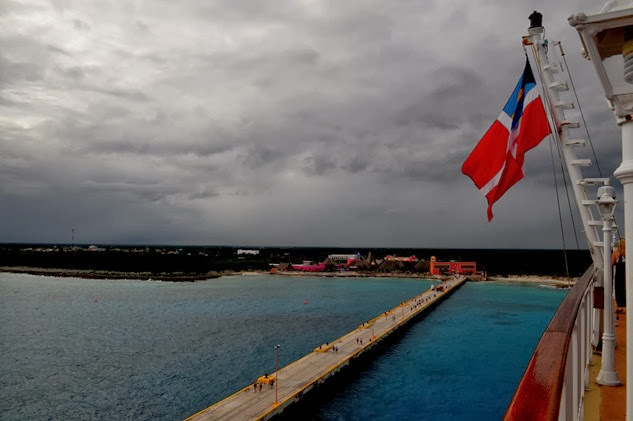