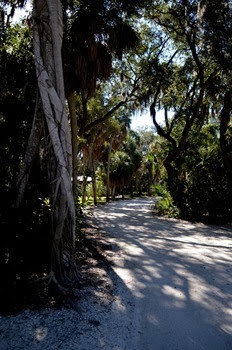 It is the morning magic thing.  Florida brilliant sunshine, balmy air, light and shadow through the oaks and cedars and palms. Birds singing, a few voices here and there as folks leave the campground.  Actually Mo and I snagged a waterfront site this morning for our anticipated move. Mo just said, “This is privacy without privacy!”  What she meant was that we are in our private campsite watching the activity beyond the little bayou as people pull out of the park 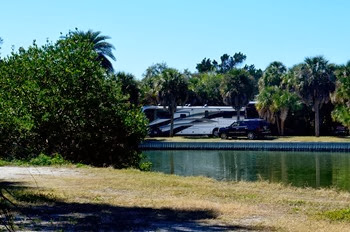 Most entertaining was this huge rig pulling a huge trailer that hauls a huge Escalade.  The rig was in site 137, trailer and all.  It took them at least an hour to get set up to pull out, and then watching them pull out was incredibly entertaining. I think there must have been more than a million bucks tied up in that get-up and you couldn’t give it to me for free!  And according to a park volunteer watching their late exit,  they were only there one night! 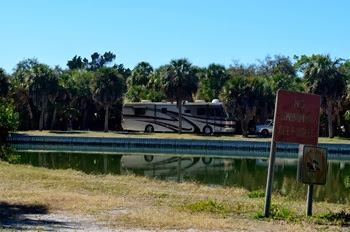 We get to watch another big rig trying to pull into these gorgeous private waterfront sites. Two guys are waving their arms around and Mo is here talking to herself saying, “Why in the world don’t you go around and pull in the right way?!”  Unlike folks in our rv-ing life who have no qualms telling us what to do, she won’t go over there and tell them how to do it better. There are two guys waving their arms while another guy drives and three women standing around taking photos. Six people in one rig?  No matter how big it is that seems a bit tight for me. 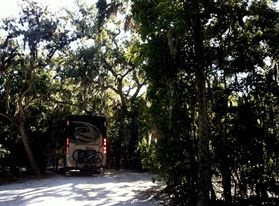 Abby is snoozing on the grass in front of us as we sit in our chairs sipping and reading.  Although the entertainment across the pond definitely has superseded reading for the moment.  Jeremy is back in the rig after thinking he was spry enough to catch a pesky squirrel that was trying get inside the rig to eat whatever he could find.

When I watch these rigs trying to manuever, I am so grateful for our 26 foot length and especially for our 11.5 foot height!  Mo just went to get the binoculars so she could check out the new folks more easily.  Tell me where you can find entertainment like this when you don’t have TV. Now THIS is what rv-ing is all about, right? 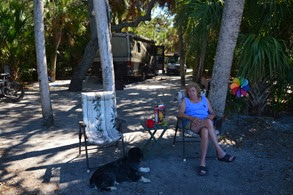 THIS! is why we are in Florida, once again, I know why we are here.  After the sun gets a bit less intense we will launch the kayaks nearby for another paddle on Mullet Bayou.  We originally planned to go explore a section of the park that we missed before launching the boats, but when we moved the rig we saw a huge line of cars at the entry station just south of the campground.  Some kind of biking/running/swimming thing called a Duatholon.  Do you bike and run or bike and swim?  No clue, but biking is definitely part of the agenda. 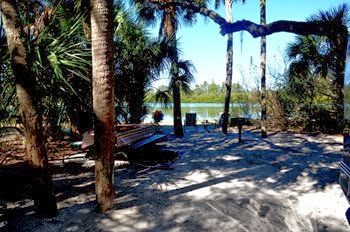 We have no need to go anywhere but right here in our perfect spot, with entertainment provided across the way by accommodating big rig folks.

But that sort of entertainment only last so long.  With scarcely a breath of wind and those bright sunny skies, the boats were calling us.  Instead of leaving the campground to launch, we decided to use one of the unoccupied tent campsites.  It was very quiet there, and we parked in the site, launched, and then moved the car to a quiet nearby spot to park. 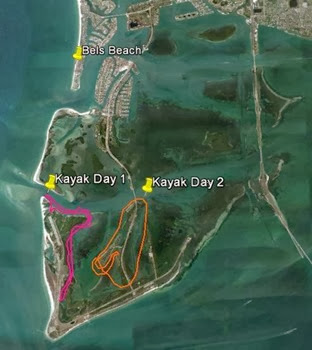 On this trip, we were again in Mullet Bayou, but on a different shore.  Decided to paddle east, and hopefully go under the bridge toward Tampa Bay.  Before we were out even ten minutes, suddenly there was a ruckus in the water in front of us and sure enough, it was a pod of dolphins.  I think there were at least three and they were cavorting and jumping and playing.  I didn’t have the camera…having decided that I didn’t need more photos of herons and egrets.  Can you believe it? 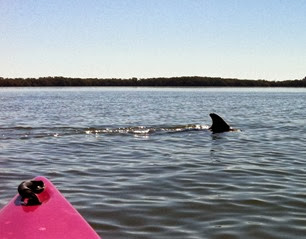 Thankfully I did have the iPhone, so grainy as the photos are, you can at least see that the dolphin was right in front of my boat.  With all the jumping around they were doing, Mo and I both wondered out loud, “Do you suppose they could dump us over?”  I suppose that could happen, in fact I think it did happen to someone with an Orca whale not long ago, but I wasn’t too worried.  It was great fun to see them playing so close. 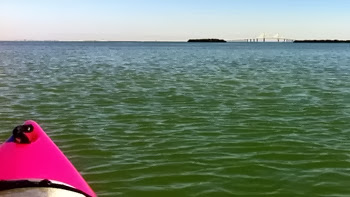 We paddled under the bridge, north into the edge of Tampa Bay, and back around under the Pinellas Bayway making a perfect loop.  Passing up our launch site to slide into the bayou by our campground was fun, with another phone photo of the MoHo site on the water from the kayak. 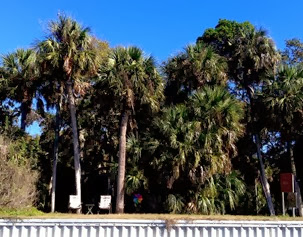 By the time we returned, it was after 4 and we needed to get a few groceries.  Google sent us back out of the park to the north and east over the Pinellas Bayway again toward a decent Publix about 7 miles from the campground.  Somehow with all that water and all those bridges things seem much more distant than they actually are.  We were back home and had the grill started up by 5:30. 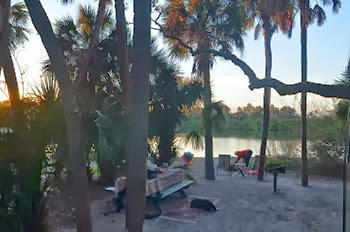 To celebrate our great days here at Fort De Soto, we decided to have a campfire.  Here in Florida, that seems to be a rather pricey celebration.  We put down a $20. deposit for the fire ring which cost $3.50 per night, and bought an orange net bag of firewood for $9.  The wood was some kind of cypress or cedar and was stringy and damp and smoked a very long time before it finally caught.

Still was great having a fire and a sunset to accompany us as we enjoyed the balmy evening on the waterfront.  Tomorrow we head south toward Fort Myers, and plan to take the slow route along the coast rather than jumping on 75.  Who knows who we might see along the way.  I guess we will find out tomorrow. 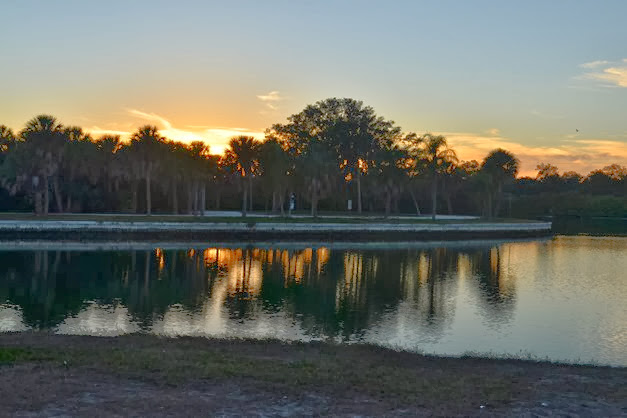