This is fourth in a series of posts about our NCL cruise on the Norwegian Jewel to the Western Mediterranean. Read about our first day at sea here,  about an evening onboard  here, and Cozumel here. Also, keep in mind that the link to the left for my photos on google will take you to many more images of our cruise and the ports we visited 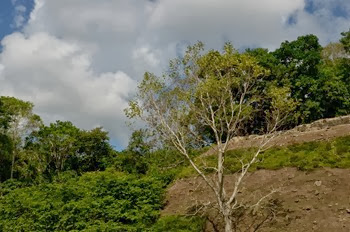 My son lived with his father in Belize a few years ago.  Son John and father are both dive instructors, so the crystalline waters of Belize were a great attraction for them.  I think John’s dad wanted to establish a dive shop there, he had one in Missouri at the time.  He also had some idea about reclaiming old mahogany logs that are submerged in the waters around Belize.  Son John says that Belize has changed a lot in the last few years, and that his father has lost some friends to the drug cartels.  Hmmmm.

On a cruise ship, for just a single day, however, all this is irrelevant.  I was enamored with all those great photos that show up on Pinterest of crystalline turquoise water and white sands.  Remember those ads on HGTV?  Gorgeous houses, and “come to our great little country!”  Looked pretty darn inviting.  I am sure that in some places it is incredibly inviting.  After all, it is an English speaking country with a stable banking system.  Or so they say.  I probably won’t ever need to find out for sure.

The reef that borders the coastline of the country is the second longest in the world, next to the Great Barrier Reef in Australia.  Along that reef are hundreds of small islands.  According to John, that is where all the beautiful little beaches with white sand and perfect water are located.

Belize is the place where we decided to pay for a ship’s excursion, choosing to visit the Maya ruins at Altun Ha.  There are many ruin excursions to choose from, both on Belize and in other port cities that we visited, but this one appealed to us because it was a smaller site, and unlike Chichten Itza, on the Yucatan Peninsula, you can actually climb the temples at Altun Ha. We later decided, for several reasons, that it was a good choice for our day in Belize. 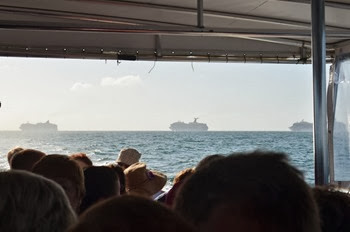 Because of the reef, the ships are anchored some distance from the port town of Belize City.  The tenders are quite different from others we have experienced, holding a about 150 people, with no top side deck.  The tendering process is similar to most ships, with tour groups gathering in the theater and waiting for their number to be called.  The tender trip took about 20 minutes and wasn’t rough or crowded due to the size of the large tender.  There were two other ships anchored nearby, including the Norwegian Dawn and a Carnival ship. 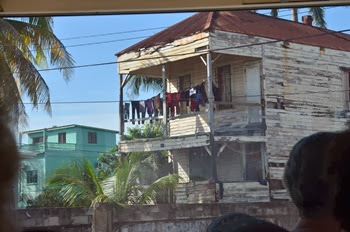 Once at the port, however, my impressions of Belize City began to deteriorate.  The port is very small and very crowded, with a terrible bottleneck between the dock and the tour busses.  Standing in a crowd of people in a narrow tunnel waiting for a bus is not something to do if you are at all claustrophobic or have a problem with crowds.  The tropical city was warm and humid and the people around us were kind of obnoxious.  We just ignored them for the most part and waited.

Once on the bus, the air conditioning kicked in and in spite of the broken seat Mo drew, it was OK.  We had two guides for the day and a driver.  Don’t forget to plan for tips to the guides and drivers on these tours.  It is how they make their living. Our first guide was OK, he thought he was funny I guess.  He would say something, then wait with a enigmatic smile for us to laugh.  I am not sure if he wasn’t funny, or if the group had no sense of humor, but the funniest thing was watching him wait for the laughs. 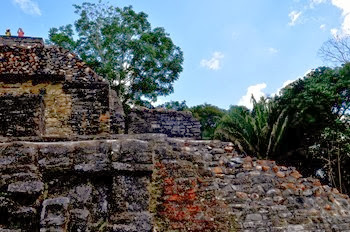 The ruins are about an hour from the port, just 59 kilometers, but the roads are bumpy and the last few miles are extremely rough dirt tracks into the jungle.  We toured around the city a bit on the way north, and I wasn’t exactly impressed.  There is an area for expats that is considered the “upscale” area, and the southern part of town near the port where the worker bees live.  The main buildings of the town that we saw looked pretty ugly…square gray things with no real architecture to speak of.

Belize used to be the country of British Honduras, controlled by the British for much of its history, hence the English language.  However most local folks speak Spanish or Creole.  The country is understandably proud of its complex ethnicity, including three tribes of Maya, Mestizo (Spanish and Indian) and Creole (African and European). 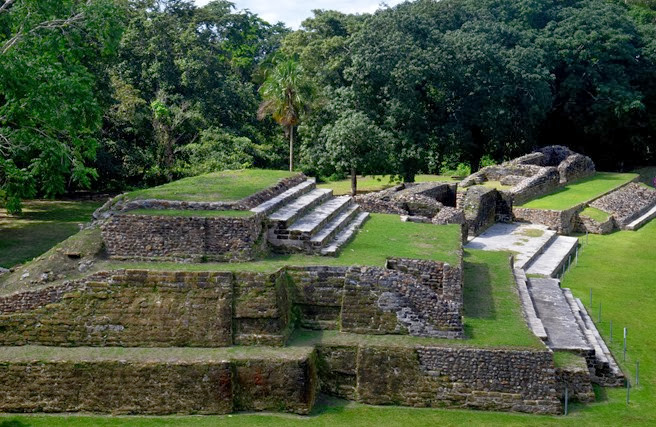 Once we arrived at the temple site, the air was warm and humid and the skies were gorgeous.  I said to Mo, “Remind me that I like tropical humidity!”.  I like it when I can experience it and then leave it, I think.  Can’t imagine living in it long term.  There were several large groups of people at the site, and the guides insist that groups stay together so they can tell their story.  We had about 45 minutes of listening to the guide standing around under hot sun and then about half an hour to explore on our own. 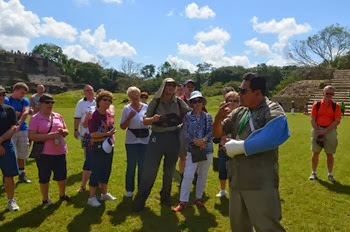 I have always wanted to visit some of these ruins, enjoyed reading about the cultures that built them, enjoyed seeing them and climbing the temples.  Believe me, climbing those steps is an exercise in balance, and I was glad for the handrails on the way back down.  We had a great time, yet I felt none of the internal awe and recognition that I have felt in other similar sites.  Guess I never was a Mayan in some past life.  I wasn’t “moved” by it.  I never did ask Mo about this part, how she felt there. I am the touchy, feely one and she mostly enjoys stuff for what it is, while I am always trying to “feel” it. 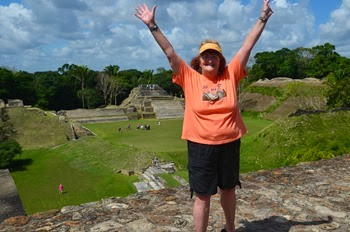 There are places I have been in the world that wake up my soul, wake up genetic memories.  Sites in Turkey and Malta come to mind, and of course, my beloved Colorado Plateau.  Maybe I was just a bit jaded by the groups and the guides and by traveling through a country where roadside garbage was the worst I have seen, ever.  Everywhere.  The waterways were thick with garbage.

Still, it was an experience I wouldn’t want to miss, and I do hope to someday see some of the other sites.  I wanted to read more about the culture, especially David Pendergast, the famous archeologist who explored these ruins and put Belize on the map.  The famous jade head, more than 9 pounds and the largest ever found, was discovered here in this temple.  Much like what has happened in other parts of the world, the artifacts were supposedly taken from the country, but this skull is now in Belize, and resides in the Central Bank of Belize vault under heavy guard. 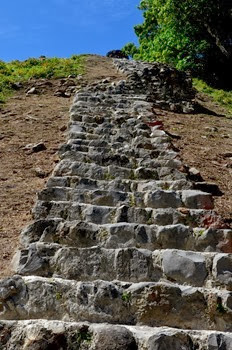 Of note during the guide’s discussions of Maya culture was the lack of sensationalism regarding the possibility of human sacrifice at the temples.  He discussed extensively the various blood rites performed by the priests, although how these are documented, I have no clue.  Piercing the tongue and genitals was a common rite it seems.  I would have to do a great deal more research to discover the source and validity of the various theories about how these temples were used almost 4,000 years ago.

We were hot and tired when we returned to the ship in late afternoon.  Heading for the pool deck, we had an especially tasty burger and fries and retreated to our cabin for a cool, air conditioned nap.  Supper again was a fresh salad from the Garden Café on the aft deck. Evening entertainment for us was some delightful music in the Magnum Champagne bar by Duo Luna, accompanied for me by a tasty cucumber basil martini.  It was to be a big night on the pool deck, with a Mardi Gras parade and some kind of big party, but our music lasted until the parade was over, so we skipped the whole thing.

Gotta take a break from all the cruise stuff now and then. 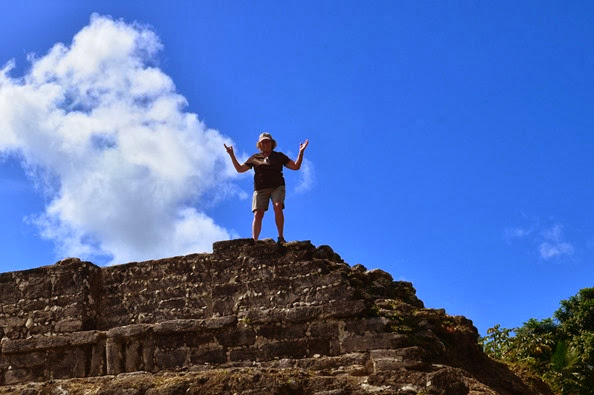