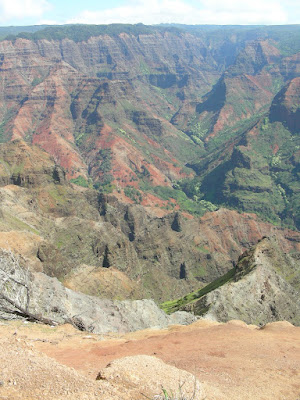 After seeing the south and east side of the island on our first day out, we decided that today we wanted to see the famous Waimea Canyon, Grand Canyon of the Pacific, as it is referred to. Our typical granola and banana breakfast and we were on the road by 8 am, traveling south on 56 and then west on 50 through the towns of Hanapepe, which we saved for another trip, and Waimea, and up Canyon Road. Interesting that the road to the canyon isn’t well marked because the powers that be actually want you to miss it so that you will continue on to the next town of Kekaha to hopefully spend some more money before continuing up this other route to the canyons. We had our trusty guidebook which warned us of this little problem, so even though we also missed the turn, we knew enough to turn around and fine the hidden turn.

The road goes up very fast, from sea level to 1500 feet in about 2 miles and then it settles down to a bit more reasonable elevation. There are several wide spots in the road for views, and the main lookouts are marked well with parking and of course, lots of people. We were glad to have stopped at one of the earlier unmarked areas for the first view of the canyon because we had the dramatic run of a herd of wild goats running along the cliff sides. Of course, the telephoto on my camera works great, but I can’t seen anything in the viewfinder in the bright sunlight so I have a closeup of some very pretty rocks, and no goats. But we at least got to see them. On up the canyon, we stopped at each of the bigger viewpoints, including the main Waimea Canyon Lookout where I bought fresh pineapple (a hit) and ice cold coconut floating in coconut water (a miss). We also stopped at the Pu’u Ka Pele and the Pu’u Hinahina Lookouts where you can see the lovely Waipo’o Falls in the canyon and the forbidden island of NiHau in the west. We got much better views of Nihau later in the day but it was fun to see it from the high point of the canyon drive.

As we drove higher, over 3500 feet, the fog started coming in and the views lessened. We drove past the Koke’e State Park and on to the end of the road and the two lookouts that give views off the Kalalau valley and those famous vertical green cliffs and the Pacific Ocean. The road wasn’t as potholed as suggested in the guidebook, but the clouds were there and the views were not. Ah well. I looked at the photos and imagined what I might see if my timing were better. There are several trails 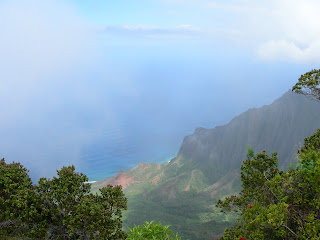 that take off from the last viewpoint, including the Pihea Trail and the Alaka’i Swamp Trail. All trails that would have beckoned us another time, but on this day our legs were still complaining about what we did yesterday on the Kalalau trail so we looked at each other and said, “Hey, who needs to hike in the fog, we couldn’t see anything anyway. Let’s go find a beach”.
On the way back down the canyon we decided lunch was a good idea and stopped at the Koke’e Lodge for a surprisingly nice meal and some fun watching the feral chickens doing their chicken thing. Chickens on Kauai are like seagulls on the Oregon coast. They are everywhere, brought here originally by the first settlers with their pigs and dogs, but since Hurricane Iniki they have multiplied even more. According to Rene they are a good thing, eating roaches and centipedes, two bugs that were also imported here. The feral cats seems to keep the population of the feral chickens to a manageable number as well. It was shocking to find a feral cat half the way into the wild area on the Kalalau trail, and out on the distant beaches of Polihale. A sound in my memory of Kauai will be of roosters crowing. All the time, in town, in the country, at home, everywhere.

After our refreshing lunch we continued back down to the western beaches, long long stretches of sand and hot sun. It was amazing just how much hotter it was down here, and the clouds of the mountains completely dissipated as we drove to the end of the road and Polihale Beach. Here the sand dunes are 100 feet high and the sand is HOT. We were happy again to have the guidebook that directed us to go left at the monkeypod tree to find the Queen’s Pond and the southern end of Polihale beach. The surf on this side of the island is huge and strong and scary, and this is supposedly a nice gentle place to swim safely. We tramped across the deep hot sand to plop down next to this lovely spot and swim. I love it, the keiki (baby) beach, and it was plenty strong for me. I swam and swam and played in the waves and felt the strength of it and remembered childhood days at Huntington Beach in California, getting pounded into the sand by waves and wondering if I was ever going to surface. Just outside the boundaries of this little reef area there were huge waves, so big the a couple of surfers trying to get into the water walked up and down the beach and finally gave up. We swam and rested and swam some more before finally decided to leave this lovely place. Drove a bit farther north into the state park to check out the picnic area and camping and after checking out the wild surf we were really glad to have found our baby beach at Queen’s Pond. 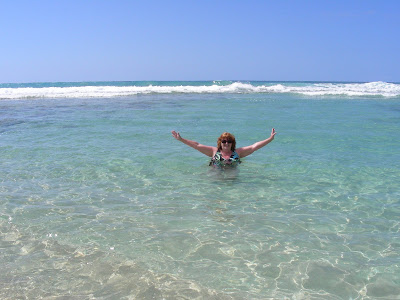 Heading back along the coast to Waimea we stopped at the famous Jo’Jo’s Shave Ice and had the tropical treat. If you have never had a shave ice, believe me, it is NOT a snow cone. The ice is shaved really fine, and the best way I can describe it is like the texture off eating a really good crispy watermelon. It ‘s ground really fine, then covered with fresh tasting tropical juices and all on top of a scoop of macadamia ice cream. Unbelieveable. Like the best watermelon you ever had, and maybe something like a tropical root beer float as well. Ahhhhh! Another perfect end to a perfect day. Home at sunset to reading and relaxing and enjoying our tropical breezes and home.
Posted by Sue Malone at 11:30:00 AM