March 11 Back to Hanalei 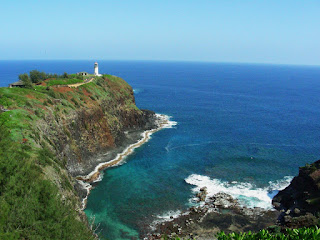 We had no major plans for our last full day on Kauai, thinking initially we would use this day to return to whatever part of the island called to us most. That turned out to be the north side. We went to the Kilauea Lighthouse to view the incredible view of the coast and the bird refuge, thrilled that the clarity and breezes had returned to the island. Still not the trades, but at least breezy enough to make for incredible views and great cloud formations. We stopped in to visit some shops and galleries at the little shopping area in Kilauea and truly loved the http://www.bananapatchstudio.com/ a place full of really special island art and ceramics. My favorites were the watercolors of island women and turtles by Joanna Carolan, http://bananapatchstudio.com/catalog/prints/jcgiclees_legends.asp and watercolors of the turtles by her mother Nancy Forbes. Another treat found there was the Aloha Spice Company and their amazing organic island seasonings. Yum. http://www.alohaspice.com/ 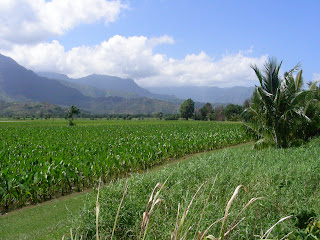 I had a photo project for the Hanalei Valley Soil Survey Update, so with GPS and directions in hand, I attempted to find the exact locations for photos requested by the Soil Data Quality Specialist in charge of the project, but back in Davis, California, where he tried to figure out where best to get some much needed illustrations. Some of the sites were easy, but as is of ten the case in soil survey, other sites were behind fences and no trespassing signs. It was still fun, though, and took us on some back roads up the valley that we might not have seen otherwise.

After the photo project, we continued north to the Tunnels Beach, supposedly the best location for snorkeling. Once again, our trusty guidebook led us to the hidden parking and access for the beach and we even found a parking place thanks to someone leaving the area and stopping to let us know there was a place to park. Once more we weren’t disappointed. This beach is the one made famous in the movie, “South Pacific” as the location for the mythical Bali Hai. We packed down to the beach with heavenly stir-fry veggies leftover from my wok cooking adventures and our snorkel gear. It was a perfectly magical Kauai dream afternoon. The sun was perfect, with some clouds coming and going and causing the light on the palis to change and shift. The fish were everywhere, with a shallow reef deepening into a very scary deep channel. Mo and I were both underwater snorkeling toward the deeper water and when we hit the edge of that deep dark thing we both burst to the surface at the same time, laughing hard. Neither one of us was ready to fly out over that underwater cliff. Later on I got a little bit more brave and snorkeled along the edge of it, but never too far out. I heard later from Karl that the current there is deadly, and can take you out to sea with the force of a freight train. Lucky for us, we were too scared of the very deep underwater canyon to get caught in it, although sometimes going back to shore was like swimming backwards. Now and then it could get a bit scary when swimming as hard as you can takes you out rather than in. But the fish were great, huge things.

I once had a salt water aquarium and saw many old friends out there, only much bigger. Our Achilles Tang was so fragile and maybe 4 inches long and I saw Achilles Tangs a foot long swimming in the shallow channels along the reef, along with Picasso Trigger fish that were a foot long as well. We saw several varieties of butterfly fish, tangs, and the big silver fish with black stripes, schooling and flying about the way that the geese do, looking like someone waving a sheet in the wind. It was wonderful, and I didn’t even swallow any sea water. A couple of times we tried the fins, but both of us just felt way too ungainly with them on so I snorkeled with my Keen’s and Mo just did it barefoot. The barefoot part wasn’t very easy, though, and next time we will buy the cheap reef shoes at K-Mart. 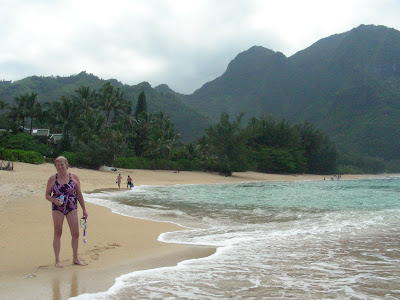 After a long and very sweet afternoon on the beach we returned home via HWY 56 and stopped in to check out the China Market in Hanalei, which was funky and not as interesting actually as the Coconut Market back in Kapa’a. There was more to see in Hanalei, and we never made it out to the very high end Princeville Resort. On this last day on Kauai, we discovered that there were a few things on the list that we didn’t manage to get to, but we just looked at each other and thought, oh well. We loved every thing we did get to for sure.

Back home in time to relax a bit before our planned night out at a great restaurant. We weren’t sure of our choice, so talked with Karl and he recommended “CocoNuts”, which turned out to be the perfect place. It wasn’t too busy, with a great local flavor, but not at all kitchy, just refined and tropical. It was a bit pricey, but oh so worth it.

Karl had recommended the Ono, but when our waiter described the special I was instantly hooked. My dinner consisted of Mahi Mahi with a light dusting of coconut, finished with a thai ginger curry sauce, with fresh red ginger, pineapple coconut, and a slaw that echoed the pineapple thai ginner curry flavors. Amazing amazing. Mo had salmon finished with a very dark sticky teriyaki sauce with pineapple rice and veggies. Entrees ran about 30 each but by this time we were a bit used to island prices, and remember our 50 dollar lunch on our first day out and didn’t mind. Had a Sonoma chardonnay that was great, and I can’t remember the name of the winery, but once again, add some warm tones of oak to anything and we usually like it. Ahh what a dinner.

We went home very content and happy with the way we spent our last day on the island.
Posted by Sue Malone at 2:14:00 PM