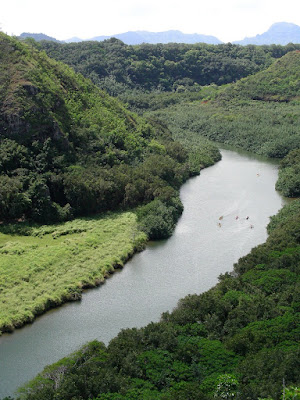 No trade winds are blowing this morning, everything is quiet as the winds do their spring time turning. It’s humid and still, the surf is low, and the clarity that was so incredible the first couple of days that we were here isn’t as striking today.

We were up reasonably early for vacation time, since we were to meet in Wailua for our guided tour before 9. We looked at several options for this first-time trip, with a large number of choices available, but thought that maybe a guided trip would be ok for us and there might be some information we would get this way that we might not on our own. Of course, there was also the problem of how to get a rented kayak from the store to the river on our little rental car, so that problem was solved with the guided trip as well.

We went with Kayak Wailua, http://www.kayakwailua.com/ and our group was led by a young man born on Kauai whose father actually owned the company. He seemed fairly quiet and reserved until you asked a question, and then it was clear that he loved to talk. He told us all about the family business and the interactions of his mother and siblings with his father, the reason Hawaii became a state, and how it was really the Hawaiians that sold out to the US because of the money involved in the sugar cane business and the powerful politicians connected to that industry. He said Hawaii was definitely a Democratic/Liberal state, although he seemed to think that it was originally more conservative and was the antidote to the entry of the liberal Alaska to the union. He talked about the trees and the plants and the people and it was all kind of fun in a way that we wouldn’t have experienced on our own. There were 12 people on the tour, the legal maximum, and who knows why but they were all young people, 3 couples from Utah traveling together and another young honeymooning couple from Minnesota. Our guide Jonathan, led us up the hidden channel to the hidden trail and all its twists and turns that went to Secret Falls. I suppose we could have found it all on our own eventually if we had followed the rest of the kayakers on the river, but for 50 bucks each, we both decided that the trip was a pretty good value. 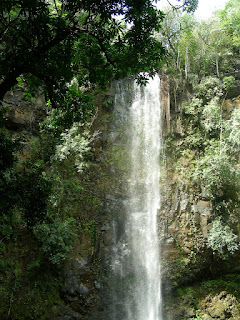 this was the highlight of the trip. The river is easy, with an easy current that makes paddling effortless, and hiking through the forest along the stream was what I had somehow imagined our Kalalau hike would be. Lovely, green, soft ground underfoot, wading streams and gentle ups and downs until we came to the falls. Secret Falls itself is all that you might imagine a tropical waterfall to be. It’s about 120 feet tall, and ends in a perfect pool surrounded by lava rock. Of course, there were people there, but somehow that didn’t really matter. The water was about 64 degrees on this day, a bit cool when you first get in, but wonderful once you are swimming. I can’t really describe how it feels to be in this place, but it is everything magical that I wanted to experience on my dream trip to Kauai. 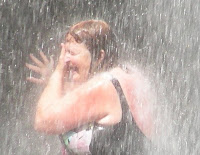 I swam to the waterfall and felt that water pounding my body sharp and hard, and surprisingly at least 10 degrees warmer than the pool itself. I then floated on my back looking up at the falls for a long time, finally ending with another moment of the falls pounding on my head. Looking at pictures of the falls and the pools, even being there and looking at people swimming and watching the falls doesn’t come close to the actual experience of being in the pool and feeling the energy of the place. I’m so grateful for this experience and won’t forget the feelings, even though I can’t even come close to describing them at all.

We hiked back down, and enjoyed the kayak trip back to the marina, although the time on the river itself seemed much to short. If we ever go back, we will definitely rent a boat on our own and take our time in this place, exploring much more than we had the chance to do on the trip.

Home in time for a rest and a shower before driving again to Kapa’a and Wailua State Park to experience the Smith Family Luau and Tropical Gardens. As with everything else on Kauai, there isn’t really any kind of dress code, and many people, including us, were wearing the standard shorts and sandals. But others seemed to use this luau as a chance to dress up, and dressing up most of all seems to be the classic matching Hawaiian shirts for the men and dresses for the women. We even saw an entire family in the same matching print, all from Hilo Hattie’s, of course. It was fun. Especially fun were the young couples, obviously honeymooners, in their matching outfits. 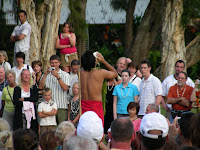 http://www.smithskauai.com/luau.html The gardens were lovely, and made up a bit for our choice to skip the botanical gardens. Lots of beautiful plants and trees all with name tags and introduced to us by the driver of the tram. “and on your left….” We enjoyed the silly tram ride, and the luau itself was fun. The “Imu” ceremony was classic, with the conch shell blowing, and the strapping young guys in their native sarongs taking out the pig. The food was served in a large open shelter and there were close to 500 people there, with free MaiTais and drinks and huge buffet lines. The food itself wasn’t exactly memorable, the kahlua pork isn’t as smoky as it smelled coming out of the pit, and it pretty salty. There was some fried rice and salads, some teriyaki beef that MMo liked and some chicken thing that was forgettable. But we had been forwarned that Hawaiian tastes were different so we didn’t really expect fabulous food anyway. I ate poi with lomi lomi salmon and actually thought it was quite good. Mo had tried poi when she was in the islands a long time ago and had no desire to experience it ever again. 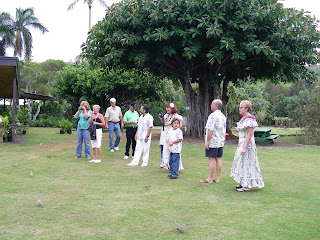 The music was classic kitschy Hawaiian with ukeleles and a lovely hula dancer. I had expected something a bit more traditional, but it was still fun. The show after dinner was held in the theater area, with a fake volcano spitting fire and dances from many places. Tahitian dancing always seems to be popular in Hawaii because it’s faster and wilder than traditional hula, and of course the fire dancer thing is always dramatic and a crowd pleaser. The whole thing was fun and the moon through the clouds silhouetting the palms against the sky made it especially lovely. We went home feeling satisfied with our Wailua day.
Posted by Sue Malone at 2:13:00 PM