I know I write about this almost every single year, but I just get so excited thinking about the oranges that are waiting for me at Orange Grove RV Park. I don’t even eat them, I juice them.  Crazy, I know, but with those big bags of juicy sweet oranges, I can have the luxury of making fresh orange juice every single day for at least a couple of weeks.  I can barely stand to drink OJ from a store any more.

We have traveled our winter escape south so many times, and several different ways.  In the years when we stored the MoHo in Brookings, before we bought the Grants Pass property, we traveled south along 101, through San Francisco and intercepting I-5 east of Paso Robles.

In the years when the MoHo was stored in Redding, we traveled south via I-5 all the way to Bakersfield before heading east on Highway 58 over the Tehachapi’s to the desert.  I-5 is in serious need of repairs, and each year it seems to get worse, in spite of the few spots that get repaired.

Mattie is a happy camper when we are rolling down the road. 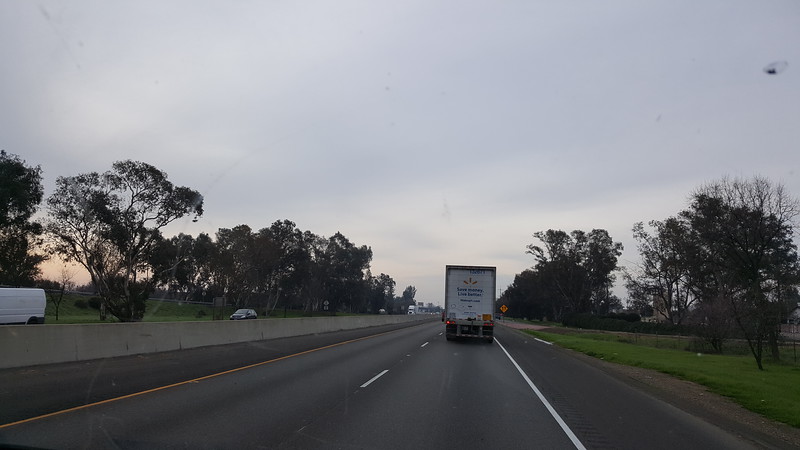 This year we decided to travel Highway 99, the old historic route through the Central Valley, Lodi, to Modesto, to Merced, to Fresno, to Bakersfield.  This freeway can be narrow and crowded, but traffic doesn’t seem to travel quite as fast as it does on I-5.  70’s instead of 80’s.  Also, except for the areas through the cities, the pavement was blessedly smooth.  No bumpety bump d bump for miles and miles and miles, and no 6 inch divots in the pavement.  We had a valve stem go out on one of those potholes, and it just doesn’t seem right that there should be big ugly potholes on an interstate freeway.

The route south to the desert isn’t that long.  Theoretically we could travel it in two days with ease, but it is more fun to take our time, stop after 300 miles or so, and arrive rested and ready to play

The trip was uneventful, leaving Lodi around 9 and pulling into Orange Grove RV Park around 3.  Perfect driving day.  We had fueled in Dunnigan the day prior to arriving at Lodi, and didn’t need gas again until we reached the Costco in Bakersfield. This time, with our travels down 99, the Costco was right off the exit.  Easy off, easy on, and cheapest fuel around.  Traffic was heavy, however, and the lines were long, as usual.  Ah yes, we are back in California again.  We have to pump our own gas.  Always a jokester around who asks us if we know how when they see our Oregon license plates.

Arriving at Orange Grove in the afternoon, we were once again glad that we took the effort to make a reservation.  This is such a popular park for Canadians on their way south and most of the license plates were from various Canadian provinces, including Ontario and Quebec.

Sometimes they have signs saying “please only one bag per rig”, and that bag is a small plastic garbage bag.  This time, however, with most of the low hanging fruit gone from the trees between sites, they had no such restrictions.  Instead, the maintenance man came up to tell me about their additional grove that is just a bit west of the main campground, loaded with oranges all the way down to the ground, and free for the picking.  I, like many others I saw, filled a grocery bag or two, and they weren’t small plastic ones, they were big Trader Joe’s cloth bags.  I took enough to last as long as I thought they could stay fresh without refrigeration.

Within minutes I had my first orange, sliced up and eaten from rind to get all the juice.  Then a bit later I did the old California trick of puncturing the stem end of the orange and drinking the juice, before I cut up a bunch of oranges and made a full glass of the sweet stuff.  Darn good thing I don’t have diabetes!

We didn’t pack our satellite this time.  It just has been entirely too much trouble the last few times we were out.  Our TV is not digital, so doesn’t work in all parks.  After all, our rig was built in 2006, before digital was the norm, and we aren’t in that much of a hurry to upgrade.  A break from TV is a nice thing.  We listen to the radio for the news, and thoroughly enjoy the different perspective of NPR in the morning.

Orange Grove does still have cable TV, however, and not the kind that requires a digital TV or a cable box.  Our problem with broadcast TV is that we are so used to watching at our own times and skipping the commercials, that regular TV is a pain in the neck, so it doesn’t stay on for long.

Orange Grove also has LOTS of outside lights on at night.  It was quiet, with only a bit of road noise from the freeway that is 1/4 mile distant, but we were glad we had darkening shades that kept the light out.  Reminded me of our nights in Alaska, where it never got dark at all, and the shades worked great.  We still have day/night shades, the kind with cords, and the MCD shade upgrade is also something we aren’t all that much in a hurry to complete.  Mo has fixed the shades a couple of times, makes sure the strings are all working properly, and our shades are just fine after ten years.  I can hardly believe we have been traveling in this rig for that long.  She is still great, and we can’t find any other that we would choose to replace her.

Onward to Catalina Spa and RV Park, with our minds curious about what we will find with the new owners and remodel of the park.