On Sunday morning the skies over Grants Pass were gorgeous.  The often present winter fog was nowhere to be seen, blue was all around us, and a few puffy clouds toward the south were lined with gold from the early sunlight.  A perfect travel day!

Our preparations for this trip were easy.  We were basically settled into the new house and had all the time in the world to get ready.  A day to wash the rig, a day to check fluids and tires on both the MoHo and the Tracker.  Two days to pack.

Packing was interesting.  For the first time in a long time, everything we have is in one house.  If I can’t find my swim suit, I don’t have to wonder in which house it might be hiding.  It is either here, or already in the MoHo.  Then of course, there is the ever present question of exactly what to take.

It is chilly here, of course, it is still winter in Grants Pass.  A much warmer winter than what we are used to in Klamath Falls, but winter nonetheless. It is really hard to imagine that shorts and sleeveless shirts will be all that we need, in spite of the predicted 80 degree weather in the southland.  I packed some long pants, some capris, some shorts, and way too many long sleeved shirts.  Mo did the same, but she is better at this than I am, packing quite a bit less.

Food supplies are always another question, but this time I had plenty of time to cook and freeze.  For a week prior to leaving, I cooked big meals, and froze the leftovers, and we had nice containers filled with chicken enchiladas, bean soup, turkey soup, carnitas, and spaghetti sauce among others.  The little MoHo freezer was packed to the gills for the three weeks ahead. 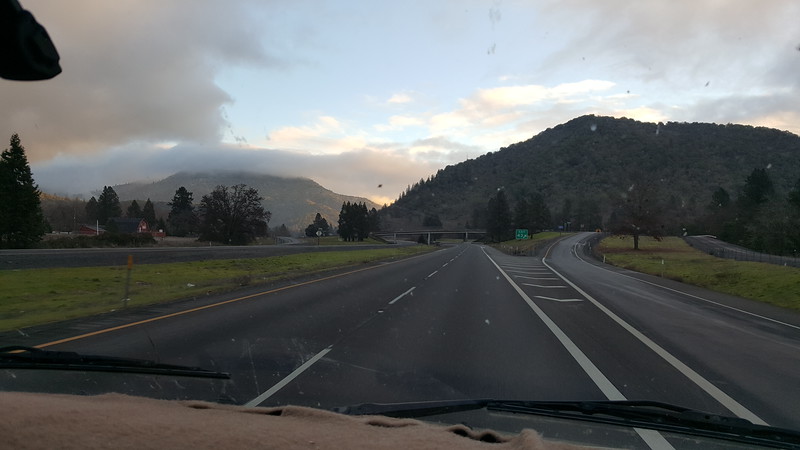 We left as planned within minutes of 9am, not a bit of traffic anywhere.  On Sunday morning the freeway was basically empty, the skies clear and lovely until…ooops….as we drove south toward Ashland and the Siskiyou Summit, the fog settled in.  It wasn’t really cold, and there was no snow.  We had planned carefully.  Only the day before chains were required over this pass and over Mt Shasta.  We actually changed our departure date to miss the snows.  Lucky us!  Many times as we have traveled south for a winter respite we have had to drive through snow and ice and fog.  This time it was only the fog, and it was a piece of cake.

In fact the entire drive was a piece of cake, all the way to Lodi, where we checked into our favorite little park at Flag City RV.  It is clean, quick, a Passport America park, with level cement sites and everything we need for a simple overnighter on our way to and from the southern part of the state.

Within minutes of landing, we were hooked up and I had Mattie on her leash ready to go play in the wonderful, expansive, grassy dog park.  UhOh.  The beautiful expanse was now completely ringed by huge solar panels, so much so that the only place to walk was on the bottom of the storm water catchment basin, in the wet stuff at the bottom.  Solar is great, but geez it is ugly, and it was claustrophobic walking in there.  The person at the desk told me that they spent “millions” on the panels, and their power bills dropped from between $20,000 to $30,000 a month, down to $20. per month.  All those panels power just the RV park, without any extra to sell back to the power company.  She said they would recoup their investment in 3 to 4 years.

It was our first night out in a long time, and it felt good to be camping in the MoHo somewhere other than our front yard.  California deserts, here we come!

If you click on a photo and discover you are in an album from another year, it is because I had to cheat.  I didn’t take one single photo on this first day out, and a blog post with no photos is pretty darn ugly.