Are you ready for another fast and busy day in the Big City?  Well, no, me either.  Instead, I will sit here in the dark at 5am in Youngstown, Ohio, sipping a good cup of coffee while I make an attempt to catch up on all that is happening with my daughters. 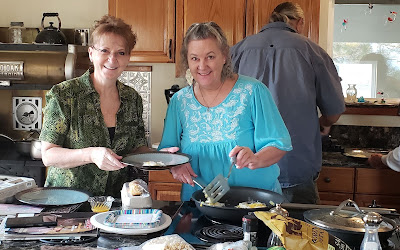 I finally managed a phone call with Deanna yesterday, the only daughter who isn't actually traveling.  Instead, she is home working and I caught her at lunch.  A quick call, but it was good to hear her voice.  We will be visiting her and her family in Northern Washington State toward the end of this trip.  I am looking forward to that. 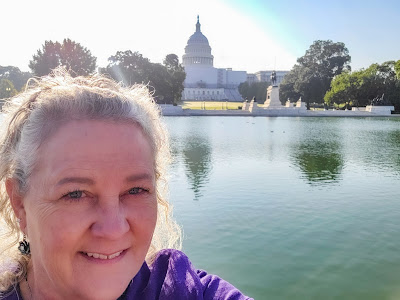 Daughter Deborah is off on a business trip to Washington DC.  I am excited for her.  In the midst of her work, she manages a quick text and a  photo every few days.  Just enough for me to see that she is getting an opportunity to see some of the wondrous sights that are part of our beautiful Capitol city. 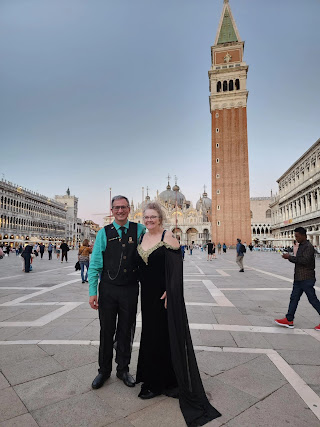 Daughter Melody is a bit more inaccessible, traveling on the other side of the pond in Italy.  Just got a note from her this morning that she and Robert and their friend Anya are boarding the fast train to Florence.  Ah, what memories.  I can hardly wait to sit down with her in person at the kitchen table and hash out shared memories of traveling in Italy.

Mo and I reached the northeasternmost point of our travels in this trip a few days ago in beautiful Portland, Maine.  A bit more meandering through Massachusetts and Cape Cod, and we were finally heading in a westerly direction.  We managed to cross the State of Rhode Island in fewer minutes than it took me to read the history of the state to Mo.  Our point of crossing was just 22 miles.  Connecticut when by in a much longer 77 miles at the point where we crossed the state on our way toward Pennsylvania.  Pennsylvania took an entire day to cross, but once again, I am getting ahead of myself.  Want to hear some more about New York City?

Once again, here is the very full schedule:

Depart Liberty Harbor by motorcoach at noon. Meet Paula our guide at the Time Warner Building and spend the afternoon visiting as many sites as time and traffic will allow:  Trump Tower, 5th Avenue, Lincoln Center, Upper East Side, Upper West Side, and Central Park. Continue to Harlem and Slyvia's Restaurant for a shared family-style dinner of soul food. After dinner tour the city "night lights" and return to the park by 8:30 PM

Through the Holland Tunnel Once Again.

Now for the fun stuff.  By Sunday morning we were well aware of the fact that arrival times were always flexible, based entirely on traffic patterns which were completely unpredictable. We learned to just relax and go with the flow until we landed somewhere in the City. This day was another somewhat disjointed time cruising around the streets of the city as Paula attempted to point out various landmarks and tell us some "inside" stories about the city and its people. 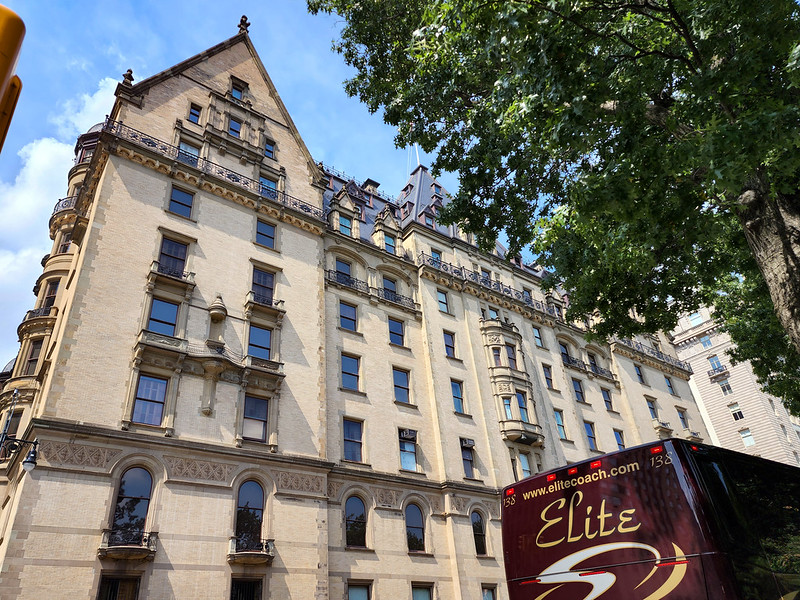 Our visit to Central Park on this day was to be a simple walkthrough on our own, but as we departed the bus in front of a rather familiar-looking hotel, I asked Paula if it was the famous Dakota, the place where John Lennon was shot by a crazy man. She said it was, and then began to tell the story of Yoko Ono's choice to create an accessible mosaic for people to honor John rather than a statue.  The mosaic is just across the street from the hotel as the pathway enters the park.

I wasn't sure quite what I was seeing until I had to push through to understand why so many people were posing in the center of the mosaic.  Ahh, now it made sense, and of course, I needed that photo for myself as well as for Daughter Melody, a lover of all things John Lennon.

The day was warm and a bit humid, with gorgeous clear skies.  On this lovely Sunday, the park was full of people from all over the world enjoying the pond, the street shows, biking and walking the paths, taking carriage rides, and lying on the green grass.

As Paula said, New Yorkers love their parks, and while it is a lovely place, I would have a hard time if the only park I could visit on a Sunday was this full of people.

Paula threw in a few tidbits about the "pencil towers" as they are called, with special wind tunnels to offset the crazy high winds buffetting the skinny towers.  The statistics regarding the number of skyscrapers built in the last 20 years helped Mo and me to understand why the New York skyline looked so different from when we had visited it on our way to a New England Cruise back in 2011.  Of course, the New World Trade Center was not yet built, and for some reason, we have no photos of the old two towers from that quick overnight visit to Queens.

After our somewhat rushed visit to Central Park, we drove to Grants Tomb.  We learned that although he was a famous general who later became President, he preferred to be remembered as a general since he had more respect for his work as a military man than as a politician.  The mosaics and stonework at the tomb were lovely.  He is buried in a matching sarcophagus next to his wife whom he adored.

I caught fellow traveler, Val, having a private joke moment at the tomb with Rally Assistant/Tail Gunner Claudia at Grants Tomb.  I won't tell you what they were laughing about.

We then visited The Cathedral of St John the Divine, a somewhat worn stone church a bit worse for wear.  Another of Paula's little stories indicated that this cathedral was let go in order to provide funds to refurbish St Patrick's Cathedral in New York City for the visit of the Pope. Paula said that 12 churches lost funding in order to make St Patrick's look up to snuff for the visit.  Once again, we weren't allowed any time to visit the interior of this cathedral, with promises that we would enter St Patrick's later in the tour.

By early afternoon, our bodies were beginning to wear out and we were well ready for the nice later afternoon meal to come.  The bus drove us through Harlem, past the famed Apollo Theater where so many great musicians played when whites and blacks were still segregated in the US.  I caught a moment when the moving marquee said "Black Lives Matter" as we passed.  I would have loved to visit the theater, but on a quick trip like this one, you can only do so much. 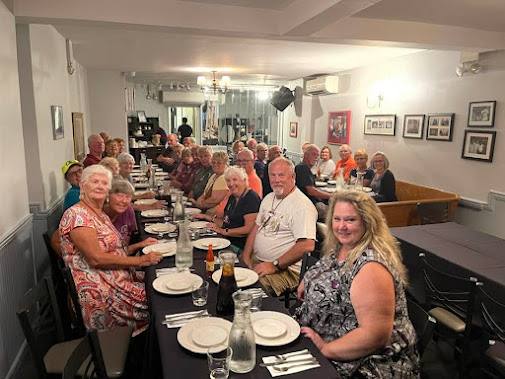 The meal was good, but it was hard to serve 30 noisy people in a small room with lots of echos.  A few times the platter of chicken made its way to us just in time to be handed across the table before we got a piece.  We did eventually get a piece of chicken, but not before several guys with large appetites had a few more. That is a bit of the downside of family-style meals with a large group of people.  Some folks are a bit more greedy than others. 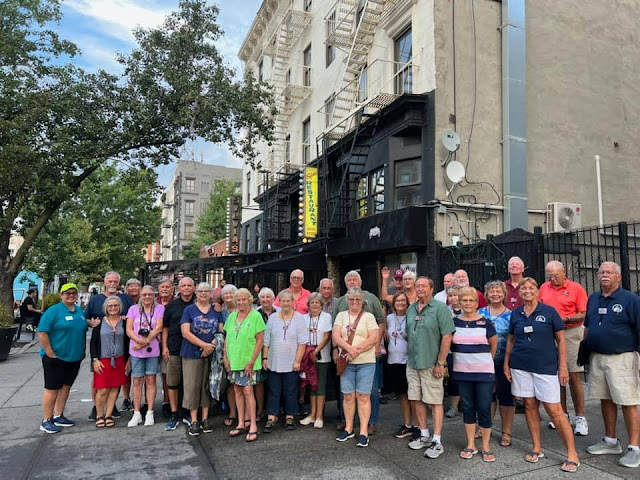 Our last adventure of the day was another visit to the "night lights" of Times Square.  Slowly making its way through the traffic and throngs of people, our bus let us once again be tourists above the fray of humanity playing in the twilight of huge neon lights and more noise than I care to remember, even from inside the bus. 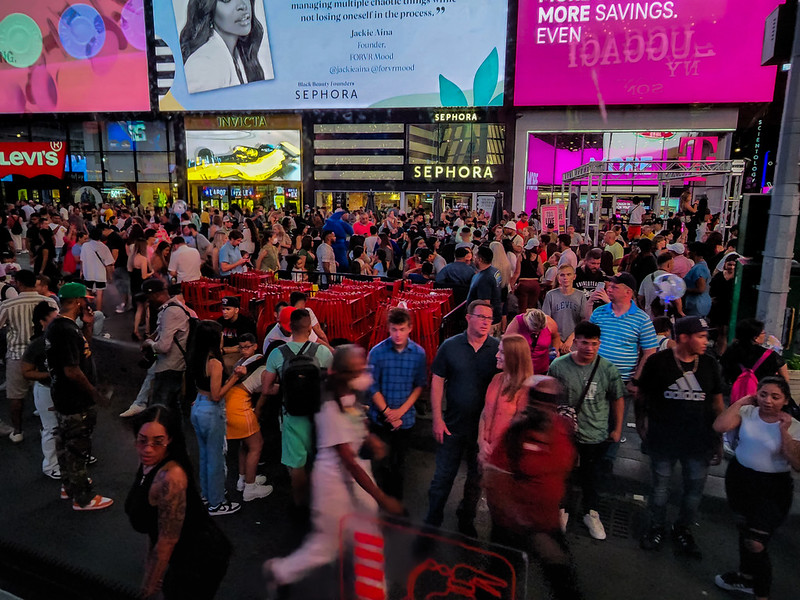 This last photo was a favorite of mine.  The "deer in the headlights" look of the couple on the curb felt like I can imagine it would feel to be a complete novice in a city like New York City.  All of us on the bus imagined this sweet couple being from somewhere in a small midwest town trying to figure out what to do next in the Big Apple.