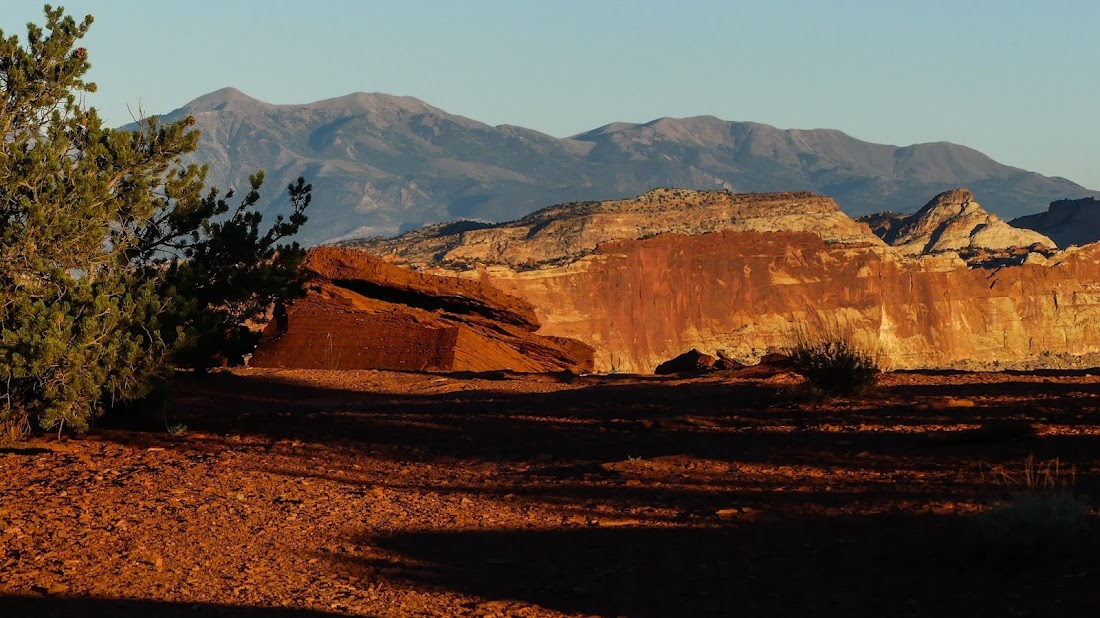 This will be a rather short post, with few photos.  Our plans for the day included breakfast at the wonderful Capitol Reef Inn and Cafe, but when we arrived at 8am there was a closed sign on the door saying they were closed for the day due to lack of staff.  Glitch number one.

Instead we found a restaurant connected with a hotel east of Torrey, the Pioneer Kitchen, and in spite of the busload of tourists that were finishing up breakfast, we had a table in a short time.  The breakfast and service were decent too, but it didn’t have the ambience of Capitol Reef Inn.

The next plan for the day was for Dan to install the right front brake pad on the MoHo. Long story short, two weeks before we left Grants Pass we knew the brakes on the MoHo were making funny noises and managed to get an appointment at Les Schwab to have them checked.  They rotated the tires and checked the brakes.  They said they were fine. We chose Les Schwab because most other shops in Grants Pass had either no lifts strong enough for a motorhome, or a wait of weeks to months for an appointment.  Les Schwab said the brakes all checked out fine.

On the trip, the brake sounds were getting noisier than ever, and we thought maybe it was blowing sand that was in the brake lining. When we returned from our Capitol Reef outing on Tuesday afternoon we had Dan drive the MoHo and listen. Yeah…worn out pads grinding the right side front rotor.  Sigh.  Of course there was no one within 200 miles that could work on the brakes in less than two weeks.  Lucky us, Dan agreed to put in the pads and said that if we didn’t replace the rotor we would just have to do the job again when we get home because the pads will wear out quickly.  So we finally found pads in Loa and made the round trip to pick them up.  The rotor was unavailable locally and had to be ordered. We ordered it, but had to change our mind when Dan said he didn't have the right equipment to install the rotor.

After breakfast, Dan started working on installing the pads.  Our plan was to get that done, and then pile into his Suzuki for the gorgeous drive over Thousand Lakes Mountain to visit the remote Cathedral Valley portion of Capitol Reef National Park. Instead, Dan worked for hours on the brakes, with problems entailed by not having the right tools.  He and Mo made two trips back to Bicknell for clamps and sockets that would fit.  Not fun.  It was mid afternoon when Dan finished the difficult job.  We also had to try to camouflage the work site because in most parks it is a rule that you not work on vehicles in the park.

By the time everything was finished, Dan was exhausted, and we nixed the trip to Cathedral Valley.  Hence no photos of Cathedral Valley from this trip. I forgot to get a picture of Dan and Mo working on the brakes.

In case you have never been to the Cathedral Valley section of Capitol Reef NP I added a few photos at the end of this post from the time Mo and I traveled there on our trip to Capitol Reef in 2007.

Cathedral Valley is a must see part of the national park that many people never bother to see.  It requires scheduling and effort.  Just recently on the park website there was a notification that the Hartnet Road crossing of the Fremont River was closed.  The only access to Cathedral Valley at this time is over Thousand Lakes Mountain.  The roads are high clearance and remote. There is no estimate of when that portion of the road will again be passable.