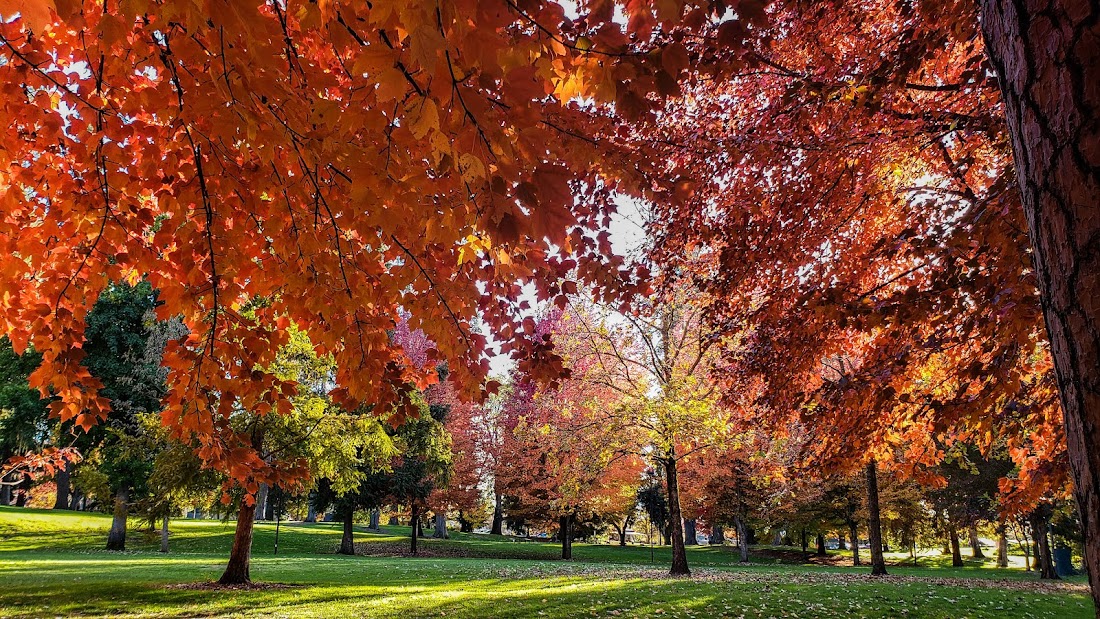 Halloween has always been a favorite holiday of mine.  It was especially sweet when I lived in Klamath Falls very close to the historic neighborhood on Pacific Terrace.  Every year throngs of people from all over the city would flock to the wide parkway lined with decorated historic homes.  We would get trick or treaters at our house, but the most fun was going with kids and family on “the terrace” to people watch and see all the kids and eat popcorn from the house with the outdoor popcorn machine and watch movies projected on garage walls.  It was a great time for me and for my grandkids who later grew up in that house on The Terrace. 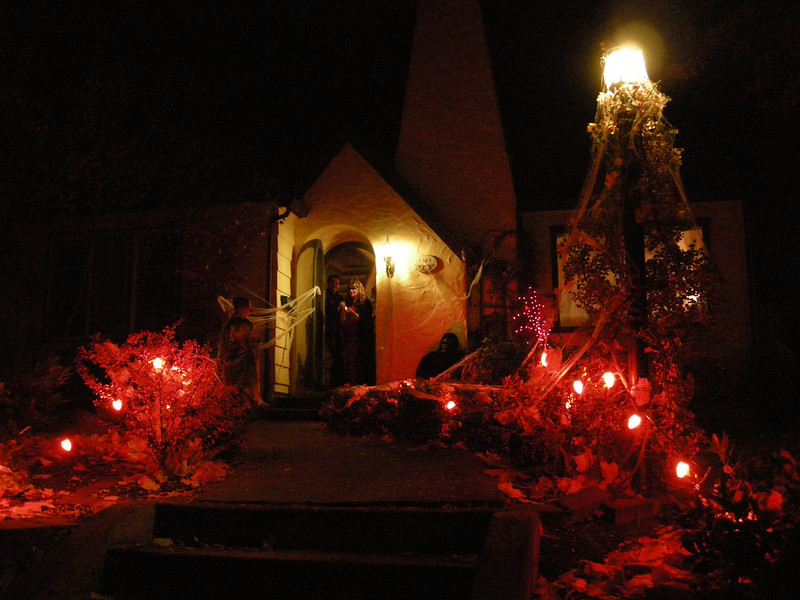 Here at Sunset House, we live on a somewhat narrow rural road, with very few children around us.  Most folks in our open neighborhood are older, and many are retired.  We also have no sidewalks, and in the three years that we have lived in Sunset House we have never had a single Trick-or-Treater come to our door.  Most years I do a lot of decorating, both indoors and out.  Somehow this year I just couldn’t get in the mood.  I put up some “fall” decorations, lights and pumpkins, but left the Halloween stuff I have collected over the years in the big orange bins that I store in the mezzanine in the RV shed.  Ah, well…what can I say.  This year has been so demanding in so many ways and so mentally exhausting. 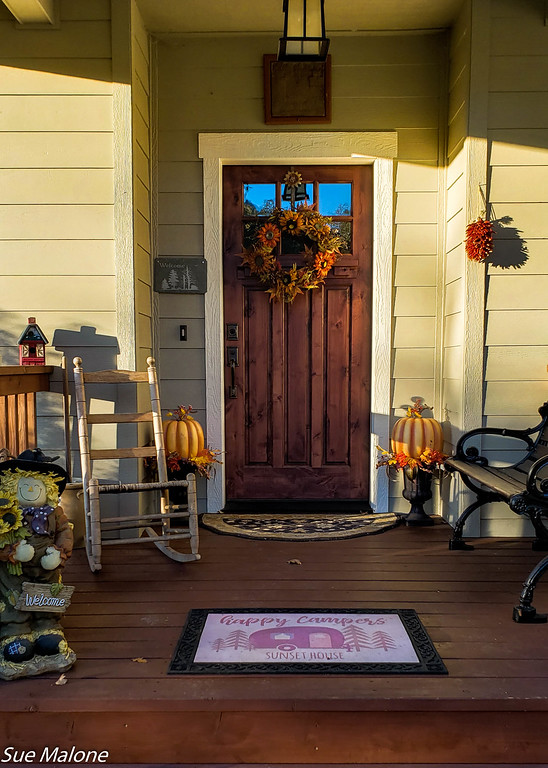 Still, yesterday I felt like Mo and I needed something to add a bit of cheer and variety to our days.  How about a picnic?!  On the previous day and on many others I pass our beautiful Riverside Park on the way to various errands.  I often think, “Why don’t we take Mattie walking in the park more often?”  Even from the car the brilliant colors of all the beautiful mature trees in the lovely park caught my eye.  Time for a picnic and a walk along the river. 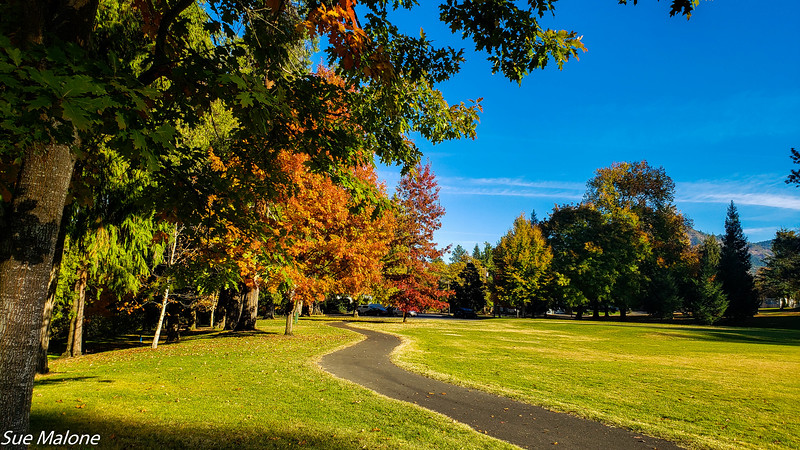 We planned to go on Saturday afternoon at 3.  The time was rather specific because from my previous day passing the park I could see that the colors were most brilliant in the late afternoon light.  Before 3 was too flat and after 4 the light would be too low in the sky to illuminate the leaves. I packed an egg salad sandwich picnic (our traditional picnic favorite for the last 18years) and we packed up the dog and drove the 2 miles from our home to the park. 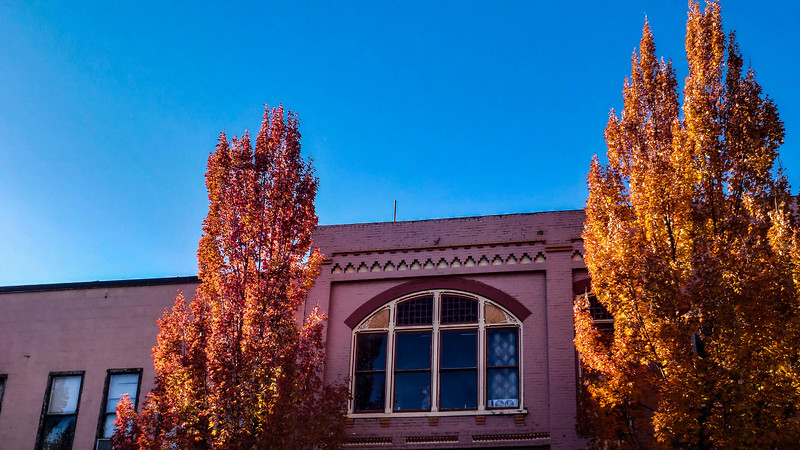 I also wanted Mo to see the brilliant color of all the street trees that line both main streets of downtown Grants Pass. Sixth  and Seventh Streets are one way thoroughfares that link the southern and northern parts of the city and the color right now is gorgeous.  I am more often the errand runner in town, and knew that Mo probably hadn’t had an opportunity to see the town street trees.

As we approached the park, I suggested that we drive the town streets before going to the park.  I had seen on the news that Grants Pass was due for a truck parade, said to begin at 3:30 pm, and I thought it might be smart to drive through town before the hoop-la began.  Oops.

Turning north past the park on 7th street, we were suddenly right in the midst of the big truck parade.  You all know which ones I mean, but I am not going to talk about that part.  Neither of us would have chosen on purpose to get caught in the middle of this parade, but somehow there we were.

My liberal friends will be aghast and my conservative friends will cheer, but we actually got a big kick out of the whole thing.  It was loud and the trucks did spew a lot of diesel, but in general most drivers were polite, and were simply excited by their cause.  I saw no guns, although many of the trucks did have gun bumper stickers. I was thrilled to see that there was not a single confederate flag anywhere. I would have never chosen to participate in this parade, but simply wanted to see the downtown trees.  I will be glad when all this is over, to say the least.

I thought about how parade deprived we are in this stupid COVID year.  Grants Pass usually has at least half a dozen parades and many amazing events throughout the year that have all been cancelled.  I love parades and I found myself laughing out loud. 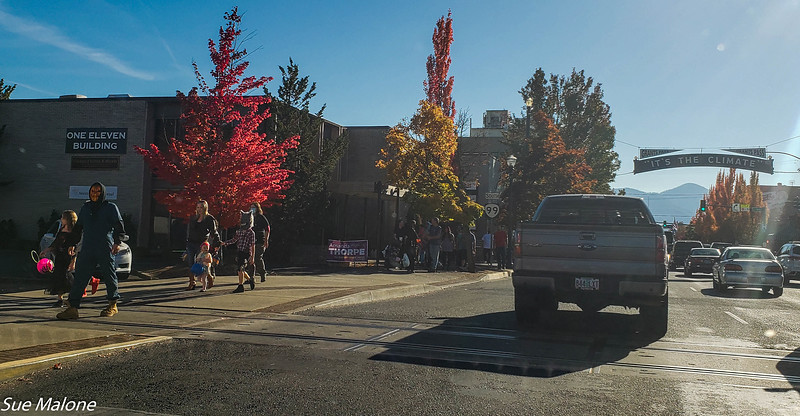 Then the best part came as we approached the main business section where we discovered throngs of kids and families trick-or-treating along the sidewalks.  Business owners (the ones that are still open) were passing out safe treats in safe ways to the kids. 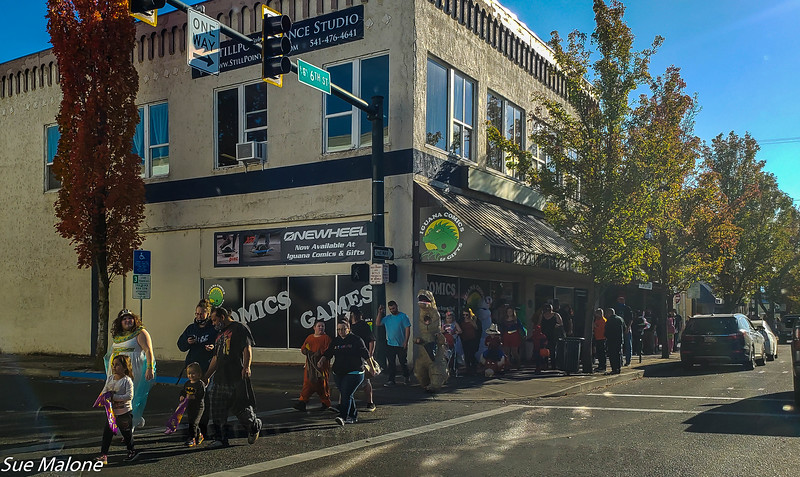 It was so encouraging to see them having fun in their costumes as they walked along the streets. It was a great alternative to door to door trick-or-treating that has been discouraged in Grants Pass this year.

It was a gorgeous, blue sky day with temperatures around 70 degrees, much warmer than the icy Halloween nights my kids grew up with in Idaho and even on Pacific Terrace.  The street trees in town were amazing.  Many of them much taller than I ever noticed in their summer green cloaks.

When we got to the park, all was quiet, as most of the big flag draped trucks were continuing around the city loop.  We parked and then walked along the river to find a perfect picnic table with a view for our late lunch/early supper. 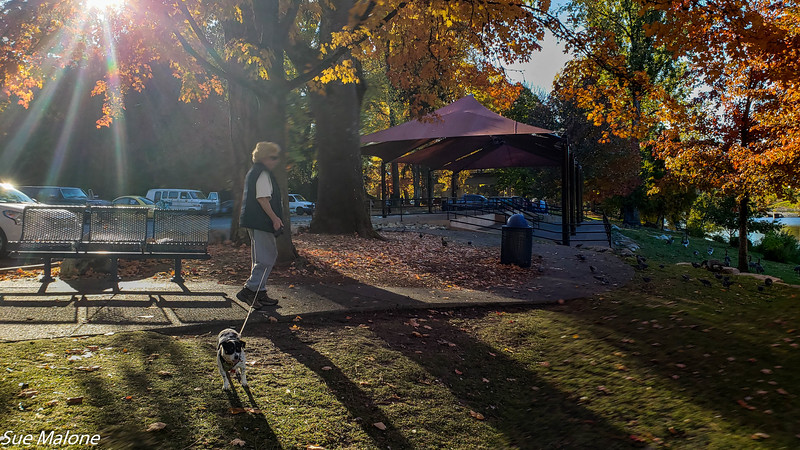 Riverside Park is truly a treasure, and the mighty Rogue River was deceptively quiet on this lovely fall day.  We thought once again that someday we might launch at the park and try this quiet part of the river in our kayaks. 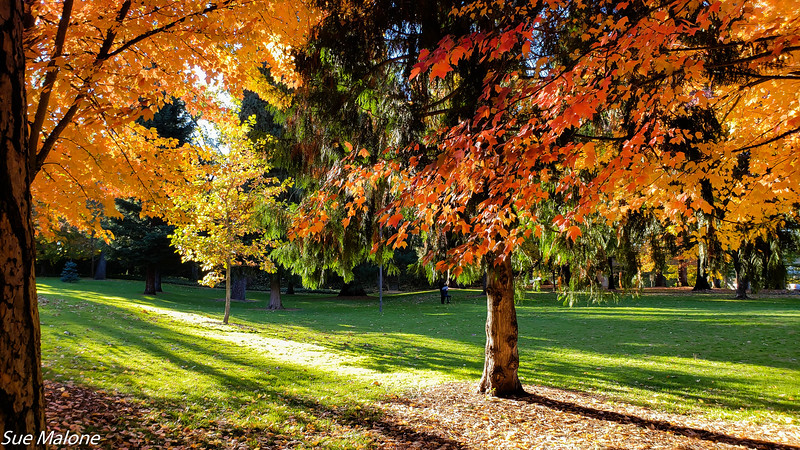 Whomever is responsible for this beautiful city park should be commended.  The plantings are wonderful, and among the big giants there are new plantings to take over when needed.

There were several varieties of oaks, maples, and sweet gums in addition to some beautiful old redwoods, pines, and firs.  The expansive lawns allow for lots of play area and the playground for the kids now has a new spray park that was added this year. The ducks, geese, and pigeons were as happy as ever to hang around the picnic areas hoping for treats. 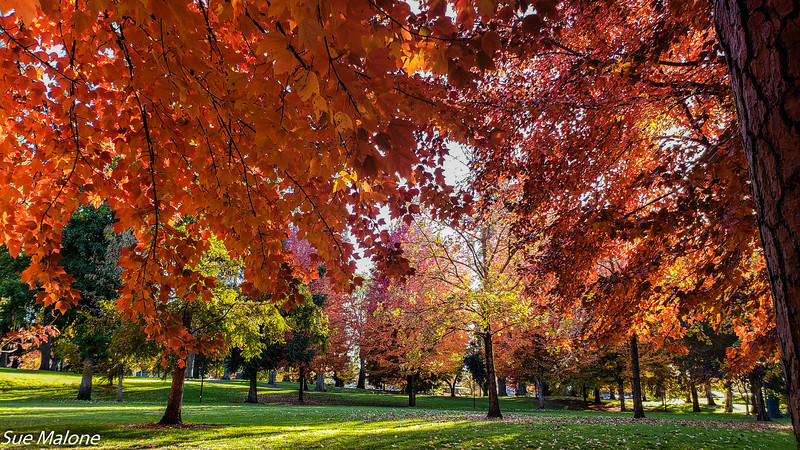 Mattie was thrilled with the entire day, especially the parade part.  She sat in the middle of the Tracker console watching everything intently.  She never barked, but she was very excited about the whole thing. 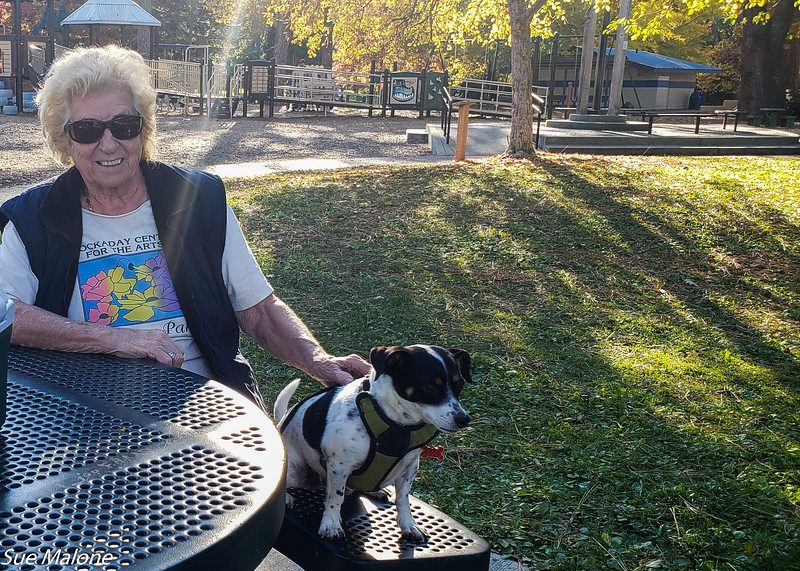 Of course, kids and ducks in the park were exciting to her as well, and she loved every minute. It was a surprisingly lovely afternoon and left both of us in a happy place.