Have you ever missed your sailing deadline on a cruise ship? You know the drill...the ship is ready to sail and over the loudspeaker comes the captain's voice, "Will Mr and Mrs so and so please contact the service desk immediately!" You roll your eyes and look at each other wondering just what kind of people don't get back to the ship. We came very close to being a couple of those kind of people. 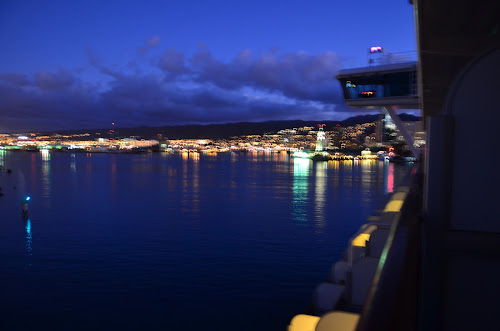 We sailed into Honolulu before dawn with the city lights sparkling on the shore. By the time we were docked the sun was rising over Diamond Head. It was beautiful and clear except for a few clouds and the temperature was already in the mid 70's. To skip the middleman, we had previously purchased tickets and transportation to the Polynesian Cultural Center on Oahu's North Shore, about a 90 minute drive from the Aloha Tower where we got off the ship. 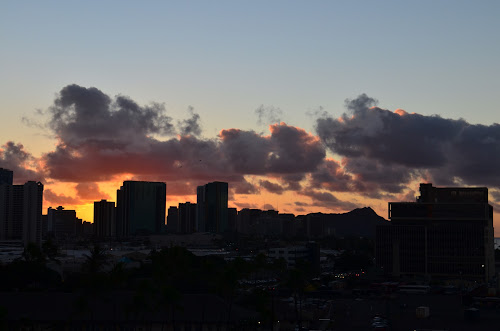 We planned our departure with plenty of time for the 2.5 mile walk to the Ala Moana Hotel, designated pick up location for our bus to the center. When I was five, our family moved to Oahu, and I remembered the Royal Hawaiian as the only hotel on Waikiki. I knew that Honolulu was a huge city, so was tickled that I got a tiny glimpse of the famous landmark through the bus windows as we passed by. 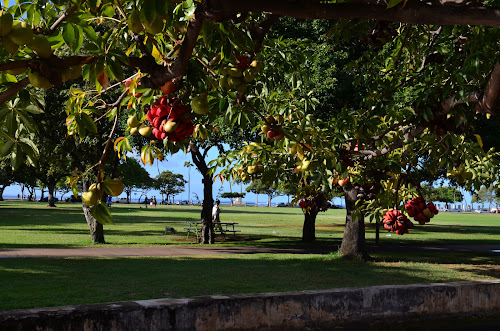 The drive to the North Shore was gorgeous, with the rainy side of the island lush and green as I remembered it. We arrived at the Cultural Center just before the noon opening, and decided to explore on our own without the benefit of a guide. Since we had to be back to the ship for a 9:30 sailing, we paid for an early departure at 6:30. We would miss the nighttime performances, the fire dances, and the big dinner, but had plenty of time to immerse ourselves in what is essentially a theme park version of the Polynesian Island culture. 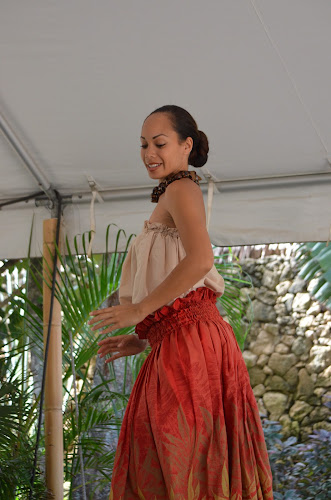 The day was wonderful, with visits to each of 8 different island cultures amidst gorgeous landscaping. Each area had scheduled performances and we managed to get to all of them. I leaned a lot about the various cultures, the different languages, the history, and the different styles of dancing.

Hawaiian dances are lyrical and gentle. Tonga was a big hit with a great drummer who brought up folks from the audience to perform. The dances of Figi were dramatic, especially the men, and the audience was involved and played the bamboo sticks to support the dancers. 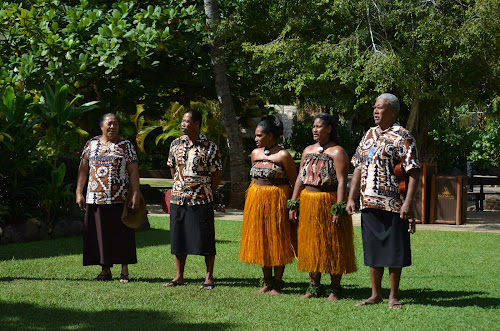 We continued to explore the exhibit until mid afternoon when the canoe parade was scheduled to begin. Each island group was represented in the parade with colorful costumes, music and dancing. Tahitian dances are always popular because of the fast hip action, unlike the gentle Hawaiian hulas. The other interesting thing I noticed is that there were no bare midriffs or coconut bras to be seen. All very G-rated and family friendly.

What we learned as the afternoon went on is that the Polynesian Cultural Center is an LDS venture, associated with the adjacent Brigham Young University Hawaii campus. Most of the employees are attending university and this is the creative solution of the church to help the students pay for their education. The students come from 72 countries, and the dancers and musicians are native to their respective islands represented at the center. That explained the lack of bare midriffs.

The Samoan exhibit was the most entertaining in my opinion. The guy was a kick, a great low key, very dry comedian who kept us laughing as he started fire with a stick and some dry coconut husks. He was pretty impressive when he whacked open a coconut with one blow, offered the juice to a spectator, and proceeded to grind coconut and wring out the milk while he told funny stories. The entertainment climaxed with an young man skinning up a coconut palm. Pretty amazing to see, actually.

We then took advantage of the free tram tour that went out of the park to see the BYU campus and the Mormon temple that is adjacent to the campus. Interesting tidbit: the Mormon church bought more than 6,000 acres here in 1865 planning for the education of the Polynesian peoples in the Pacific islands. 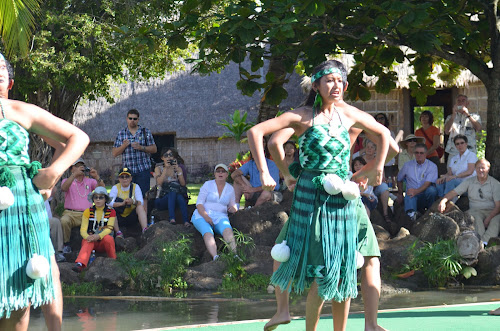 We decided on a simple snack bar super while we waited for our bus departure. As directed, we waited out front at 6:15, and waited, and waited, and waited. No bus. We went back inside to the customer service desk, and no one could seem to figure out where the driver was. We were told that if we missed the bus, the taxi fare back to Honolulu was $80. The minutes were ticking by, and we started to panic while the park staff hemmed and hawed and tried to find the bus and driver. 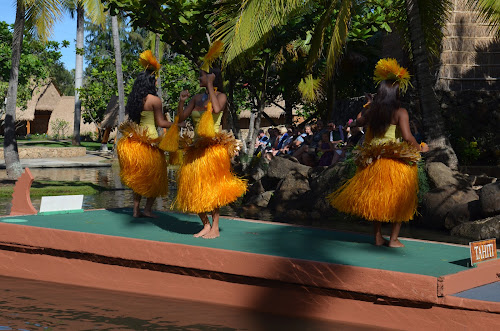 Mo was furious, I was panicked, and finally we said, "Get us a cab!". The problem was that there are no cabs on the north shore and if they called for a cab, it would take more than an hour to get there. We were pretty much out of luck if someone couldn't find a bus. I said, "Surely someone here has a car to take us back?!" But we were informed that was impossible due to liability issues. 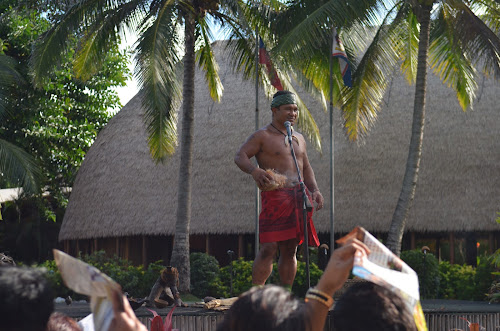 I proceeded to come very close to throwing up on their service desk, when finally a bus driver appeared. Elizabeth, the customer service representative, was great, staying calm through the whole process, and she went on the bus (operated by a different company) and convinced the driver to take us directly o the ship rather than to the Ala Moana hotel we had paid for. We actually got dropped off right at the ship with an hour to spare. 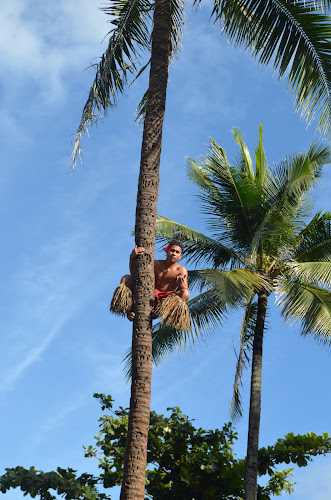 I have heard of folks missing their ship, and the usual solution is an expensive flight to the next port of call. Our next port was five days out in Ensenada,Mexico! Our passports were safely on the ship, the car key in the safe as well. I couldn't envision a solution if we had missed the ship. I am sure we would have figured out something, but I am sure glad we didn't have to. 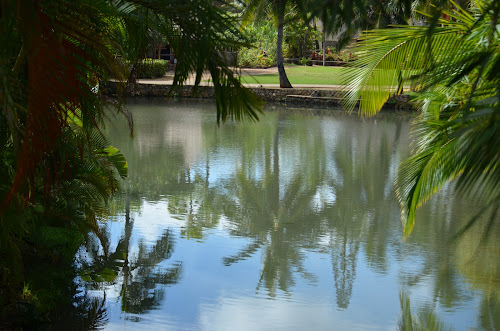 Another lesson learned: take the emergency contact information from the trip insurance with you! I tried calling Princess from the number on our cruise card and got a message saying to call back during business hours! Of curse it never occurred to us to take our passports when disembarking in our own country.

Once back on the ship we dropped off our stuff in our cabin and headed directly for the bar. A stiff shot of Jack Daniels was my cure for the still wobbly knees. All is well that ends well and we are safely on the ship ready for the next few days at sea.