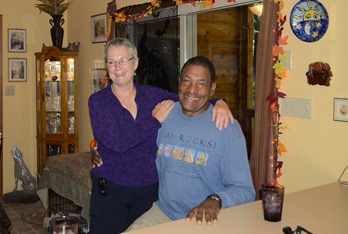 I am reasonably certain that just about anyone dropping in to read my blog already reads Laurie and Odel’s blog, Semi-True Tales of our Life on the Road. I read Laurie’s blog long before I knew there was such a thing as an RV blogging community, and when we met in person in 2010, Laurie gave me a ton of pointers on how to do a blog, and where to find some of the other bloggers I might like to read.  My “stretch” format for this blog was stolen almost directly from Laurie, with her permission and help of course. 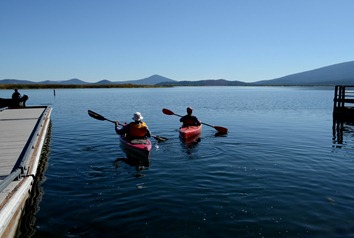 Our paths have crossed a few times, and it was with great delight that I discovered they planned to be here on Saturday before leaving Oregon for the season on their way back to California. I spoke to the weather gods, who teased me with early morning freezing fog before bringing on a gorgeous, wind free, sunny day in the mid-60’s. Perfect kayaking weather!  Especially for someone not familiar with that unsteady feeling when you get in a kayak for the first time. 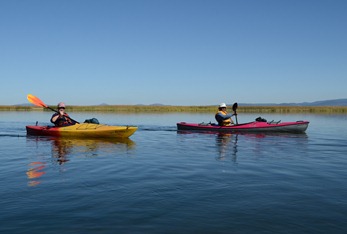 “Just like a bicycle”, I told Odel.  Watching that first wiggle as Odel got used to the boat reminded me of my first time after we bought the kayaks.  I remember thinking, “OMIGOSH, I will never be able to do this”. Within minutes, Odel was racing along like a pro, although the exceedingly calm waters without a lick of current were probably a bit helpful. I was so busy worrying about Odel in that first few moments that I have no clue how Laurie did as Mo helped her first launch.  I am pretty sure it was flawless, though, because I heard no splashes or exclamations in the background and when I finally looked up, Laurie was racing along even faster than Odel. 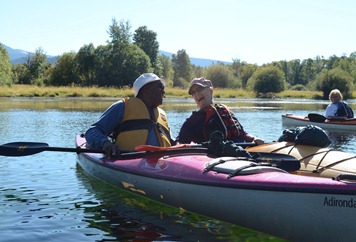 We spent a couple of hours meandering down to Harriman Springs, laughing and talking and enjoying every minute of the gorgeous sunshine and bluebird skies. Turns out it was opening day for duck hunting season and we were entertained by men in camouflage  and boats that looked like some sort of grass hut plying the waters out to the main part of Klamath Lake where they could shoot. Lucky for us, there was no shooting in Pelican Bay or down Harriman Creek, and the white pelicans just meandered around as if everything was just fine.  Surprisingly, we didn’t see many ducks, and from what they said, neither did the hunters! 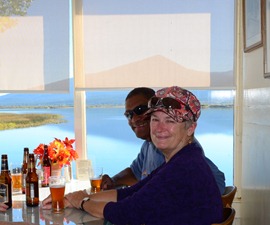 After our kayak, we walked the short distance to the Rocky Point restaurant, still quiet enough in the early afternoon that we snagged the perfect windowside table for our refreshments.  The laughing and conversation continued until we all realized that our late lunch/early supper plans were turning into much later than originally thought. We drove back to the house with hungry bellies. Before long Mo had the baby BBQ going and I had a Copper River salmon filet on a plank with a new homemade citrus rub I decided to try.  Our guests brought some great Chardonnay to flesh out the meal. Dessert was a big adventure, since I decided to try the new “thing” that seems to be going around food circles recently.  Fresh strawberries with a good 18 year old balsamic vinegar over vanilla ice cream.  The real kicker to this recipe is the call for fresh black pepper.  Yes, that is pepper!  I was chicken to put it on, but in a flash Odel had that pepper shaker out and was peppering the ice cream with abandon.

His bravery inspired the rest of us, and amazingly, it was really good!  Mo, who is the least adventurous eater among us, opted for chocolate on her vanilla. I offered my little bit of leftovers in my bowl (yeah I am still dieting and only ate a tiny bit!) to Mo, who smiled and said, “I’ll bet Abby will like this.” Abby of course, thought it was great, pepper and all. 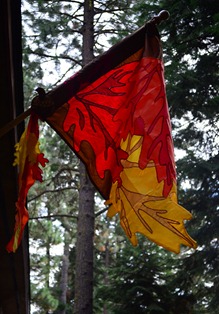 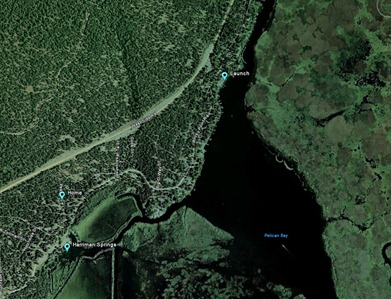 Here is a map of where we kayaked today.

A few more photos of our visit are linked here.