Day 3 or First Day in Istanbul 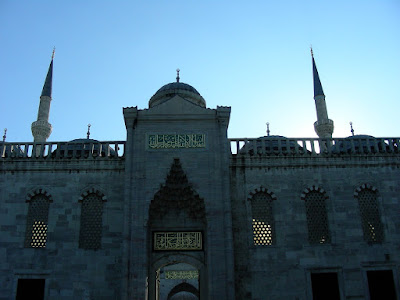 It’s amazing what sleep will do for you! The room is tiny the beds very narrow, firm (another word for hard), and low to the ground. But the water is hot, and not brown as I had read in some of the reviews, and we both slept really well until about 2am. I guess that was around 4 or so in the afternoon back home so maybe to be expected. There is even a window that opens and we listened to hard rain and thunder, expecting the day to come to be challenging. Imagine our surprise when we woke again to brilliant cool sunshine!

Breakfast in the hotel is a buffet, an interesting one, if not exactly superb, but there were good breads, goat cheeses, many kinds of yogurt and muesli, apricots and olives, and the coffee was strong but not thick and bitter as traditional Turkish coffee is rumored. As we dressed for a cool and possibly rainy day in Istanbul, I felt my spirits rising with the sun.

The bus is big and comfortable with huge windows and open space, so even though I am the seasick/carsick prone one, it didn’t bother me in the least. We began our morning with a trip back through the “new” part of Istanbul, Taksim Square, the location of our hotel, to the “old” part of the city, across the Golden Horn, a brackish water inlet estuary, and to the ancient portion of the city called “sultanamnet” which contains some of the city’s most significant monuments. We first stopped at the Hippodrome, where a gigantic stadium once stood at the heart of the city. Istanbul means nothing in Turkish, and the story is that it was once called only “the city” However the turks couldn’t speak the greek words meaning the city, “is stan” and it morphed into Istanbul, really meaning nothing at all. It was really the only city in the beginning. Most cities in the Byzantine era were smallish and in this city in the 3rd century the population was already a million. So people from the entire known world considered this place “the city”. The Hippodrome was the center of this culture, and we saw the Egyptian Obelisk brought in from the Luxor tomb in Egypt and the Serpentine Column brought in from Delphi in Greece, dating from 479 BC. It’s amazing to see that this obelisk has stood for more than two millennia, even with Turkey being right in the midst of 3 tectonic plates that generate huge earthquakes. 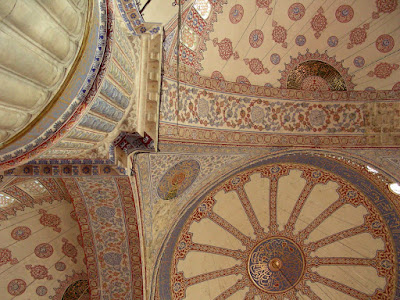 We walked from the Hippodrome to our first piece of magnificence, the Blue Mosque. The history of this building in incredible as well, and the name is simply taken from all the blue tiles from Iznik that decorate the interior. Suleyman, our guide, gave us some fascinating background on Islam, and mosques as houses of prayer only. A Muslim doesn’t belong to a particular congregation, he simply goes to a mosque to pray with like minded people at the proper times. The mosque was commissioned by a Sultan during the time when the Ottoman empire was declining, and there was controversy then about the 6 minarets which were said to be a sacrilegious attempt to mimic Mecca. It was huge, and gorgeous, and incredible, no matter. A bit overwhelming.

We then walked across the square to the Hagia Sophia, a much older building, once a Christian church when it was built in the 6th century. At the time, there was nothing in the world of its stature, and it was a place where people came from all over the world to worship. Later it was converted by the Ottoman sultans to a mosque, and much of the Byzantine art mosaics that depicted people, saints, Mother Mary and such, were covered up because images of people are not allowed in Islam. In the 19th century it was restored and some of the mosaics are now visible. It is a place of great wonder, and I overheard one gentleman whispering to his wife, “This has been on my list since college!” I also remember reading much about this particular place in art history classes as an example of Byzantine art, and one of the beginning places of art and culture in the world. Another amazing experience.

For me, though, sensory person that I am, the highlight of the day came as we were leaving Hagia Sophia at prayer time, and the Muzzein call to prayer echoed throughout the squares across the city. It was a moment in time, of really feeling the essence of a place, and knowing that you are in a spot that isn’t on the list of everyday. I am in Istanbul. Istanbul. 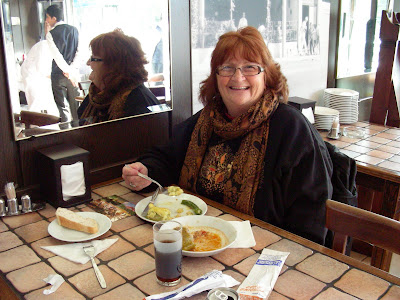 We had lunch at a great little place called the Pudding Shop, which as a cafeteria style eatery filled with amazing looking food. I had cheese stuffed zuchinni, a stuffed pepper of some kind with delightful sauces. There was a photo of Bill Clinton on the door, and the owner standing there was very proud that Clinton had been there not just once, but twice. We walked along the streets after lunch, smelling the great smoky smell of roasted chestnuts coming from the street carts, and watching all the people. The place is filled with people and full of life and energy, even though it’s Sunday and some things aren’t open.

The last stop for the day was the Topkapi Palace, palace of the Sultans, on one of the 7 hills of Istanbul, Seraglio Point, where the Golden Horn, the Sea of Marmara, and the Bosphorus straits come together. In Byzantine times, monasteries and public buildings were on this site, and later it became the residence of Sultans for more than 400 years. It is now a rambling museum, filled with glittering collections of the royal treasury including an 84 carat diamond, a collection of sultan’s robes and other treasures. The views of the Bosphorus from the terrace were wonderful, and we looked across from Europe to Asia just across the water. The Straights of Bosphorus are the narrow channel between two continents. Once we leave Istanbul, our travels will be in Asia until we return at the end of the trip to this amazing city that sits in two continents.

Mo and I decided to skip the organized “Istanbul by Night” dinner and dancing and do our own thing instead. After resting for just a bit in our room, we dressed again in something a bit warmer and headed for Taksim Square, and the “pedestrian mall”, the hub of activity in this part of the city. The square is huge, and marked by a MacDonalds and Burger King, but once you are walking down the street, everything changes. We decided to follow our guide’s advice and had dinner at a nice restaurant called “Haci –Baba”, where we had lamb shish and meatballs from the grill and kabob menu. It was refined and delicious, but after we left there we walked down the streets with the throngs of people and saw food that was beyond anything I ever imagined. Especially fun is the way that they have all the cooks making the food in the windows of the restaurants, smiling and laughing with you, and smells wafting out the open fronts of the shops. I read somewhere today that there are only three unique kinds of cuisine in the world, French, Chinese, and Turkish! I am going to have to explore that whole concept a bit further, but for today I just thoroughly enjoyed the wonderful food and incredible atmosphere of this very energetic, cosmopolitan, ancient and fascinating city.

I told Mo today, a couple of times, I do really love this place, it’s incredible. I felt a moment of wonder as we crossed back over the Golden Horn with the mosques and minarets silhouetted against the skies and thought how incredibly lucky we are to have a chance for this kind of experience. It’s like pinching myself, reminding myself, I am in Istanbul. Istanbul!
Posted by Sue Malone at 4:25:00 AM