Wednesday morning we got up and had a good breakfast, enjoying the desert light a bit and didn’t get packed up and driving until 10 or so, thinking we had an easy day. 300 miles should be an easy day if we don’t try to do anything extra, but on this day we planned to see Joshua Tree National Park. Even though it was overcast in the morning, but the time we got on I-10 the skies were clear and bright. The turn into Joshua Tree wasn’t far from the California State Line and we went into the park, ambled the narrow roads and checked out the visitor center. This park doesn’t allow dogs on any of the trails, so we couldn’t go walking with Abby anywhere, but we did drive around a couple of the campgrounds, including the Belle campground which was small but seemed like the least crowded and the best place for us. The Jumbo Rocks campground was almost full and much busier, and we managed to get back on a cul-de-sac where turning the rig around was a bit dicey, especially since it was an uneven dirt road where we would have a much difficulty trying to unhook the Geo. After a bit off jockeying we got around the turn and breathed that sigh of relief that also said we were glad none of the tent campers there were around to watch us! 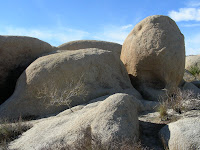 We looked at a few more campgrounds, and then stopped at a simple wide place in the road all on our own to park and have lunch and take Abby for a little walk just out into the rocks. Perfect. No people, nice view, perfect amenities, while I made a light lunch for us and we relaxed a bit looking at the soft rounded granite shapes of the landscape. Joshua Tree would be a nice place to camp and relax a bit, and maybe have some time to actually build a fire and bring out the cards. I think we played dominoes once on this trip, and am not sure if we ever managed a single card game. Geez.

Leaving Joshua Tree we traveled along the desert through Johnston Valley, which is still BLM land and designated OHV area. The good part about this is that we didn’t see any OHV’s, just a very long vista of wide open undeveloped desert. Something to think about when I complain about those OHVer’s taking over the country. Not a house or a pole in sight. It was truly beautiful. On west to HWY 18 and Bear Valley Road where we took a side trip south on Central and east on Roundup Way to find Mo’s old rental house in Apple Valley when she was teaching there so long ago. The little block house was actually still there, although surrounded by some mcmansions, but they all shared the same once magnificent view of the desert to the north, marred now by development as far as your eye could see. It was especially bad to the west toward Victorville and Hesperia, and as we headed west again on Bear Valley Road I felt as though we had dropped into some kind of hell. All I could think of is how grateful I was that I never applied for the soils job in Victorville and felt sorry for Paul who went to that job from rural Colorado. 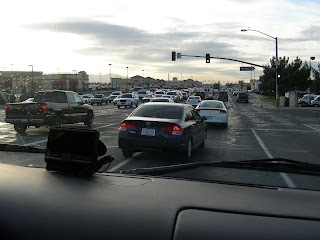 We finally made it to our CampClub USA campground, Sierra Vista RV Park, in Mojave, just before they closed at 6 and found our place to settle in. One more time one of the fancy bells and whistles for the MoHo gave us some trouble. While we were driving through Joshua Tree, the warning light for the leveling jacks came on, and we stopped, turned off the engine, and it went off. But then last night when we tried to level the rig, nothing happened, no lights, no power to the touch panel, nothing. In spite of all the manuals we have in the huge box, there wasn’t a speck of info on the levelers, so we went searching the internet. Only problem, is that in Mojave, even though I had 4 and 5 bars on the phone card, the connections was still s l o w w w . as in very nearly not moving at all. In spite of that, we found the HWH Hydraulic Levelers web site and found the owner’s manuals, the operation manuals, and even a powerpoint demonstration on how to level the rig. Sure do wish I had that in the beginning! But all to no avail, except to reassure us that sooner or later we will get some good help from either Rueben at Stahman’s or from HWH directly and eventually the levelers will work again. Lucky for us it was the last night and our site was unbelievably perfectly level. Something that doesn’t often happen even in the most expensive parks. And our little place only cost 13 bucks last night! It was after 9 when we finally gave up on figuring out the problem and went to bed. About then Mo discovered some glitches in the Fantastic Fan in the bathroom, but thank goodness she agreed that we didn’t want to spend one more minute trying to figure something out.
Posted by Sue Malone at 2:06:00 PM