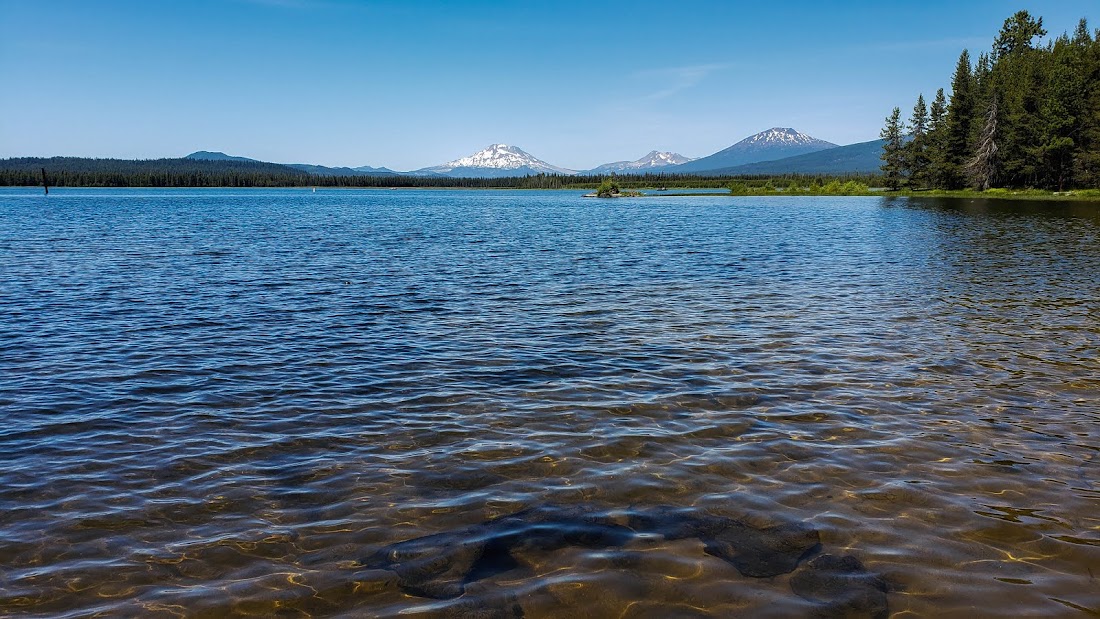 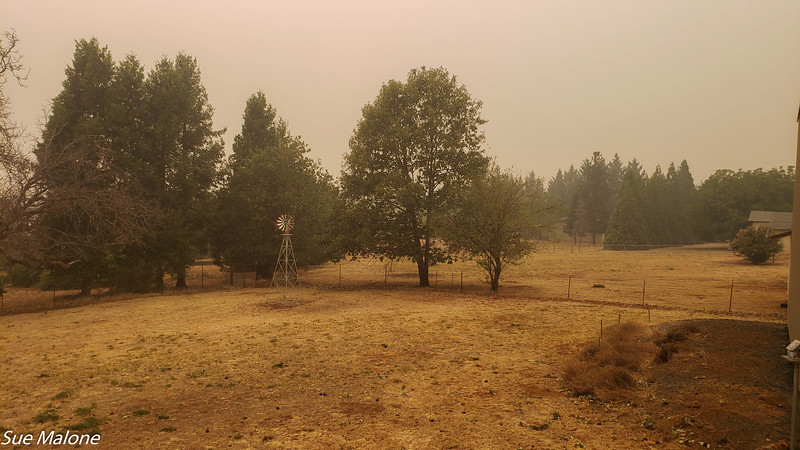 As I write this morning, the air is cooler, insulated from the September sun by the thick smoke that surrounds us and extends over much of the United States. I am grateful for every little bit of relief, no matter how small

After Jimmy and Nickie left for Farewell Bend and Crater Lake, we settled in to what seemed to be a gorgeous day.  Clear skies with winds still over 20 mph didn’t hamper our work on the property raking up debris from the huge windstorm from the previous night.

What we didn’t realize on that Tuesday was that the huge windstorm had triggered huge fires that were moving at warp speed toward communities all over the state of Oregon.

I monitored the fires and made repeated efforts to contact Nickie to no avail.  We settled in and enjoyed the gorgeous skies here in Grants Pass for another day.

Melody and Robert’s home in Brownsville

On Wednesday morning messages were flying back and forth between me and my two daughters.  Melody, youngest, was in Brownsville north of Eugene with what is now called the Holiday Farm fire racing toward her community.

We had some good meals while the kids were here

Moments later after extended conversations with Deborah, oldest daughter, where she insisted she would be fine, I received a terse message saying, “We have been evacuated, I am coming there.”  Shortly after Deborah arrived, I got a message from Melody saying that she and her family were evacuating as well.  Their home wasn’t in an evacuation area just yet, but the speed of the fires frightened her and she needed to leave. 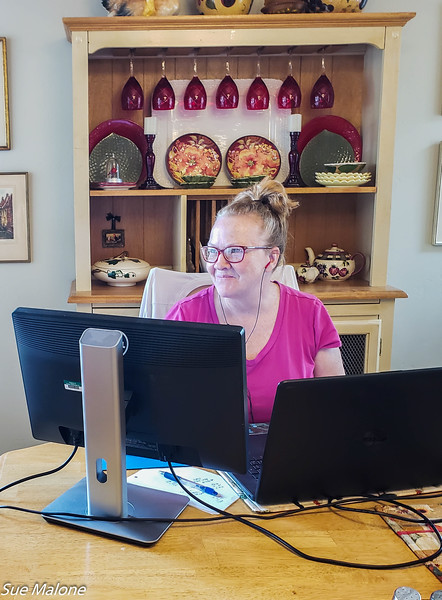 Before all this started, Mo and I had made reservations with Maryruth and Gerald to have a very special dinner at Morrison’s River Lodge on the Rogue River.  The young chef is new and his reputation was stellar.

We thought a beautiful dinner outdoors on a lovely deck overlooking the Rogue was just what we all needed to take our minds off what was just beginning to be a week from hell in Oregon.

We added Deborah to the reservation and Maryruth’s daughter was also visiting from California, escaping her fires and smoke near Sacramento. 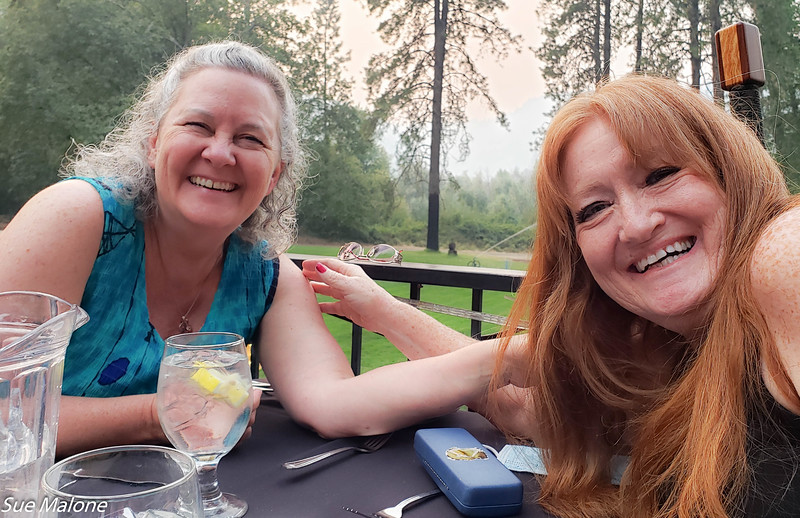 Deborah and Cathy are just 3 days apart in age, and have known each other since they were 8 months old, when Maryruth and I first met.

It was a wonderful evening, with absolutely stellar food presented beautifully. 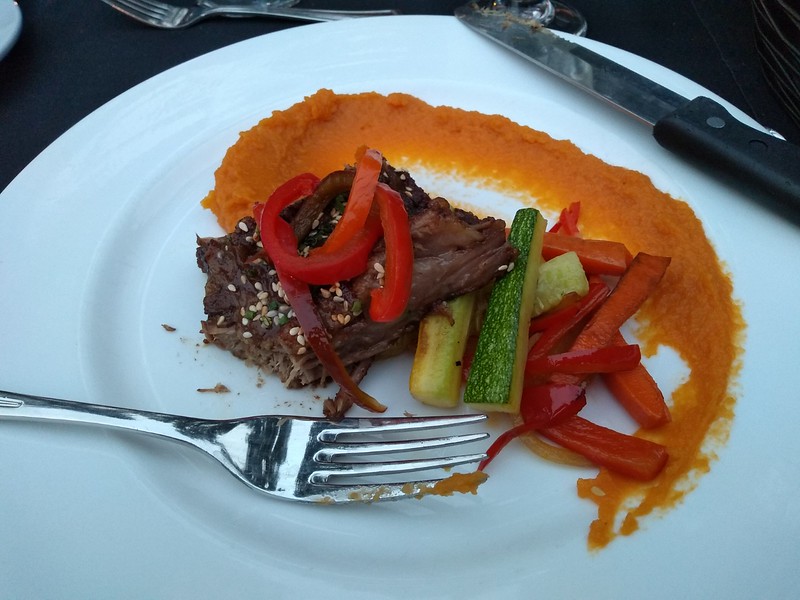 In addition to the most tender brisket I have ever eaten, (sorry Janna), we had salads and veggies from the on site garden, and iconic Oregon blackberry creme brulee for dessert. 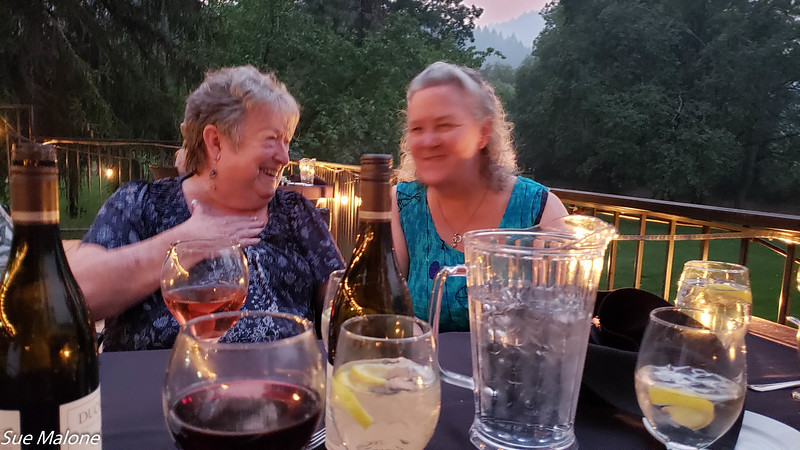 Excellent Oregon Pinot Noir and a local rose accompanied the lovely meal.  What a treat!

The air remained crystal clear until just a few minutes before our departure for the river and by the time we settled down for dinner the skies were murky and the sun was orange.  It was only the beginning.

The next few days are a blur in my mind, with Melody and Robert keeping their cats company in the closed garage since we didn’t want to lose them in a strange house.  Deborah and Melody spent much time attempting to keep track of the changing evacuation zones near her house, and trying to see where the fires were headed.

The smoke was thick every single day, and as we watched the small towns of Phoenix and Talent between Medford and Ashland were decimated.  The destruction is horrendous, and so far we have no clear numbers as to homes lost or casualties, which is also true for the rest of Oregon.  Law enforcement keeps saying they want real numbers before they say how many lives have been lost.

On Friday, Deborah decided to return home, and using her identification was able to get through the evacuation barriers to her home, which was fine.  Today the fire is growing in the opposite direction and we are all fairly certain she will be OK, except for the smoke which is awful no matter where you go.

By Sunday morning Robert and Melody felt safe enough to return home as well.  The fires are still burning but the horrendous winds which fueled the initial onslaught of destruction have dissipated.  Those winds were to use Nickie’s least favorite word, unprecedented.  Our weather comes from the coast to the west fairly consistently until an occasional winter storm will bring and east or a north wind.  This time 75 mph winds from the east were hot and dry, very unusual for this time of year on the west side of the Cascades where most of the fires are now burning.  Unprecedented.

Baking a birthday cake for my day

It is now Tuesday.  The news is ongoing, but the fast moving fires have so far slowed a bit, communities are beginning to assess the damage and everyone is basically in a holding pattern.  COVID receded to simple background noise during the worst of the onslaught, except for the difficulty encountered with sheltering people who were evacuated.  Once again instead of checking fire and smoke maps, I am checking the website that tracks COVID numbers.  We have a total of a bit more than 29,000 confirmed cases in Oregon and the deaths in the state are fairly consistent at 3 to 8 deaths per week.  Here in Josephine county we have had a total of 178 confirmed cased and only 2 deaths since all this began back in March.  I am grateful to live in Oregon.

All our travel and camping plans for the rest of the month have been cancelled.  Nowhere to go with all the forests and campgrounds closed and the skies all smoked in.  We are still hoping to travel north on the first of October to visit family in Northern Washington.

A long time ago I delved deeply into the study of the Tarot, not as a fortune telling tool, but as a psychological study of archetypal images and how we can be affected by them.  One of those great timeless archetypes is represented by a card called “The Wheel of Fortune”. 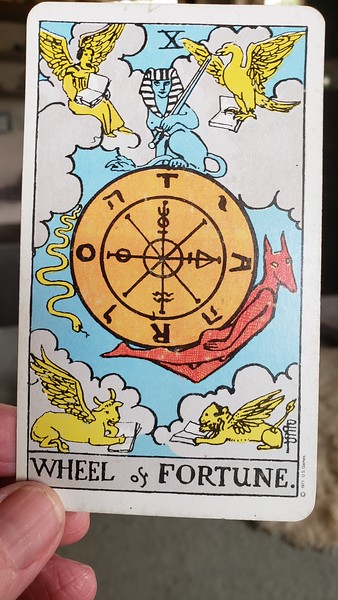 Now cheapie kinds of fortune tellers will say if you get this card you might win the lottery, but when one goes a bit deeper into the psyche of the image it tells a completely different story.  I mention this because based on my birthday (today), I am in a Wheel of Fortune year.  Fun.  What it really means is that whether for good or bad you can expect your fortunes to change and your goal is to figure out how to stay centered and balanced in the midst of the wild ride.

I can’t think of a better way to describe the year that almost everyone has experienced, beginning for me with the death of my son.  My meditation for this 75th birthday is to focus on the center of that wheel and to do my very best to remain balanced as our fortunes spin and turn from good to bad to  terrifying.